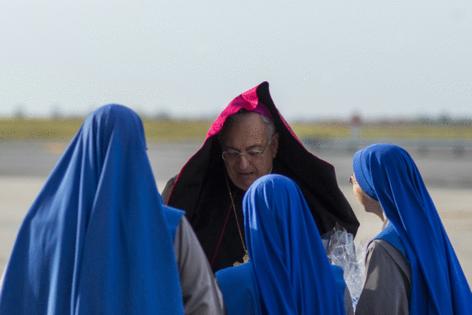 DiMarzio, 77, stepped down weeks after a Vatican investigation cleared him of allegations from two men charging they were sexually abused by the priest when he was stationed in a Jersey City parish in the 1970s.

The bishop was two years past the usual retirement age for priests of his rank, and he will be replaced by Bronx-born Bishop Robert Brennan as the spiritual leader for 1.5 million Catholics in Brooklyn and Queens.

“I welcome Bishop-designate Robert Brennan as the eighth Bishop of Brooklyn,” DiMarzio tweeted Wednesday. “I have known Bishop Brennan for many years, and have great confidence in his ability to lead the Brooklyn Diocese and and build upon the pastoral achievements we have made.”

Attorney Mitchell Garabedian, who represents both accusers, said DiMarzio’s departure will not affect the pending lawsuits. DiMarzio has denied the allegations from the outset.

“The retirement will not prevent the two separate civil lawsuits from proceeding,” he said in a statement. “The recent finding of the Vatican clearing Bishop DiMarzio of sexual abuse was the result of a biased investigation rendered by a self-serving Vatican court with a predetermined agenda.”

Brennan, 59, is an alumnus of St. John’s University and was ordained in Rockville Center, Long Island. He and DiMarzio concelebrated a morning Mass at the Co-Cathedral of St. Joseph in Brooklyn to mark the changing of the guard.

“During my over 12 years as archbishop of New York, I have come to know him as a fine priest and bishop, a warm individual, and a good friend,” said Cardinal Timothy Dolan, head of the neighboring Archdiocese of New York.

Dolan appointed an outside firm to investigate the charges against DiMarzio, with the probe conducted by a one-time federal prosecutor and a company headed by former FBI Director Louis Freeh.

The investigators found the allegations “not to have the semblance of truth,” according to a statement from the Vatican’s Congregation for the Doctrine of the Faith.