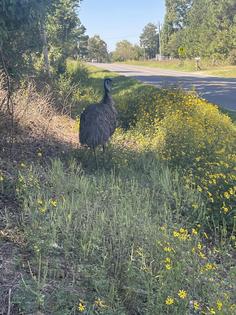 (UPI) Sheriff's deputies in North Carolina responded to an unusual situation when an emu was spotted running loose in the area.

The Lee County Sheriff's Office said they spotted the emu Wednesday in Tramway, and deputies responded to help capture the flightless Australian bird.

The sheriff's office posted photos to Facebook showing the emu walking next to a road in a wooded area.

The emu was safely returned to its owner.

(UPI) A Lithuanian stunt rider broke a Guinness World Record when he performed a no-hands motorcycle wheelie for 1,902 feet and 8 inches.

(UPI) The owners of two African servals in British Columbia said one of the cats was captured and another remains on the loose after the animals escaped in what might have been an attempted theft.

(UPI) A gaming company in Spain broke a Guinness World Record with the creation of a Tetris arcade machine that stands 16 feet and 1.15 inches tall.

(UPI) A young cow was caught on camera making a run for it after escaping from a transport trailer on a Massachusetts highway.

A video captured by a witness in a neighboring car shows the cow slipping through an opening ...Read More

(UPI) Police in Maine came to the rescue of a raccoon found trapped in a water-filled storm drain pipe.

The Yarmouth Police Department said in a Facebook post that officers responded to a report from a concerned citizen ...Read More

(UPI) A California woman was shocked to receive a phone call from Idaho saying her lost cat had been found after nine years.