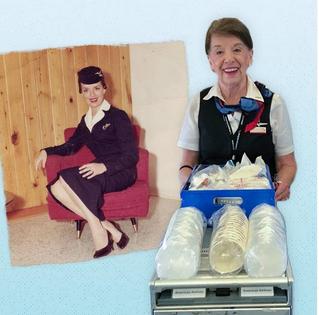 (UPI) A Boston woman who has been working for American Airlines for 65 years was named the world's longest-serving flight attendant by Guinness World Records.

Bette Nash, 86, started working as a flight attendant in 1957 and continues to this day without any lapse in employment, Guinness World Records confirmed.

Nash said she has spent most of her career working on the New York-Boston-Washington shuttle because it allows her to return home at night to care for her son, who has disabilities.

Guinness said Nash is also the oldest currently-serving flight attendant in the world.

Nash said in 2017, when she celebrated her 60th anniversary with the company, that the job has changed considerably since the early days.

(UPI) A man visiting family in Connecticut captured video of a family of bears that spent some time lounging on patio furniture before struggling to get into a hammock.

Justin Mathews said he was having coffee at the ...Read More

(UPI) Police in a Chicago suburb said they have captured one of the loose pigs seen wandering the town for more than two weeks, and three more porcine fugitives remain on the loose.

(UPI) A Pennsylvania man eating with his family at a Delaware restaurant made a surprising discovery inside of a clam: a purple pearl.

Scott Overland of Phoenixville was eating at the Salt Air restaurant in Rehoboth Beach...Read More

(UPI) A Maryland man said a family vacation led him to the store where he bought a scratch-off lottery ticket worth $250,000.

The 58-year-old Reisterstown man told Maryland Lottery officials he and his wife were ...Read More

(UPI) Firefighters in Virginia came to the rescue of a kitten trapped in a Fairfax County storm drain.

(UPI) An Ohio library said a book returned to the facility after 50 years was more than merely overdue -- it was stolen.