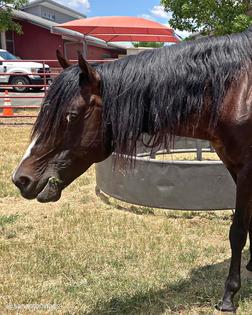 (UPI) Authorities in Texas are trying to find the owner of a mystery horse found wandering loose through a residential neighborhood.

City of San Antonio Animal Care Services said in a Facebook post that animal care officers responded to the area of Rigsby and Highway 87 when a horse was reported wandering loose through the streets.

Officials said a witness managed to lasso the horse and keep it out of traffic until it could be turned over to the animal care officers.

The horse, dubbed Celyao by rescuers, was not microchipped and did not have any brand officials could locate.

The horse was taken to the Animal Care Services corral while the Bexar County Sheriff's Office attempts to locate the animal's owner.

(UPI) A Michigan woman said a wrong turn led to her winning a $500,000 lottery prize -- although she was unaware of the amount of her jackpot for three months.

(UPI) A Swedish strongman broke a Guinness World Record in Italy when he threw a washing machine a distance of 14 feet and 7.2 inches.

(UPI) Animal rescuers in Scotland said they are trying to solve the mystery of a cat that stowed away on a delivery truck -- and may have come from any of several locations in Scotland and England.

(UPI) Wildlife officials in Tennessee came to the rescue of a black bear cub spotted with a plastic food container stuck over its head.

(UPI) National HVAC Tech Day, celebrated annually on June 22, was started in 2016 to pay tribute to the technicians who make sure homes are property air conditioned in the summertime.