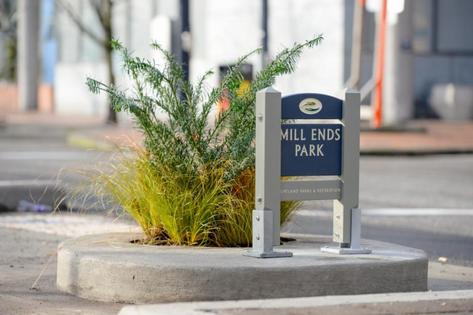 (UPI) The completion of a road construction project in Oregon resulted in the return of the world's smallest park -- now located about 6 inches from its former location.

Mill End Park, a tiny patch of green in the median of Portland's Naito Parkway that received its first plants and its name from Oregon Journal reporter Dick Fagan in 1946, became a globally famous landmark as the world's smallest park when it received recognition from Guinness World Records in 1971.

The tiny park was demolished as part of the Portland Bureau of Transportation's Better Naito Forever project, but Portland Parks & Recreation announced Mill End Park has now been reconstructed about 6 inches away from its former location.

The park, which measures about 2 feet wide with a total surface area of 452 square inches, bears a new sign and a new cloverleaf park border.

Portland Parks & Recreation said officials are hoping to hold a "rededication ceremony" for the park in the near future.

(UPI) More than 2,000 students from three Indiana high schools came together Friday to attempt a Guinness World Record for the largest game of Duck, Duck, Goose.

(UPI) A British library said a book checked out more than 60 years ago was finally returned to the facility after being found at another library in Croatia.

(UPI) A pair of extremely distressed sneakers offered by luxury brand Balenciaga are drawing attention online for their "full destroyed" look and their hefty price tag: $1,850.

(UPI) Animal rescuers in Texas fished a muddy dog out of a storm drain and were able to reunite the canine with his owner.

The Austin Animal Center said in a Facebook post that a pair of animal protection officers were ...Read More

(UPI) An 82-year-old Maryland woman achieved a longtime dream by walking across the stage to accept her bachelor's degree.

Mae Beale, 82, who had a long career as a licensed practical nurse, returned to school in her late...Read More

(UPI) Animal rescuers were summoned to a warehouse office in Australia when a mother kangaroo with a joey in her pouch somehow found her way into the building.

Andrew Hargreaves said he went into the back of his office in...Read More