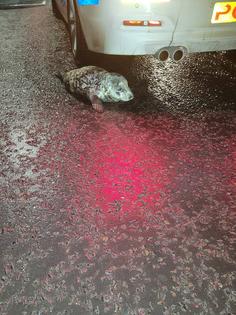 Humberside Police said the seal was spotted underneath a parked car in Grimsby early Thursday morning, and the animal fled when officers approached.

"Unfortunately, the seal didn't want to hang around, resulting in one of our slower pursuits," police tweeted.

Personnel from Cleethorpes Wildlife Rescue were summoned to the scene and were able to wrangle the seal outside of the Wilkin and Chapman law firm's building.

Wildlife rescuers said they do not know how the seal ended up in the middle of Grimsby.

"We would be hopeful that there was no human factor in his location, although it has been known elsewhere in the U.K. to happen," a spokesman for the group told Grimsby Live.

"We know he couldn't have come in via Grimsby Docks due to the large water turbines outside B&M. The only other way we can imagine is that it's traveled with the flow of water along the river and got lost from another connection to the estuary," the spokesman said.

The seal, nicknamed Oreo, was taken to the Mablethorpe Seal Sanctuary.

(UPI) A wallaby that escaped from a Belgian recreation park was safely recaptured when the marsupial was spotted in the area after multiple days on the loose.

(UPI) An artist in India broke the Guinness World Record for largest drawing by an individual when he created an artwork that covers 6,781.04 square feet.

(UPI) A London man said he was awakened in the early morning when a sugar glider flew through an open window into his sixth-floor apartment.

"I was asleep and ...Read More

(UPI) A Michigan woman found listening to her mother to be a profitable choice when it led to her winning a $1,682,998 lottery jackpot.