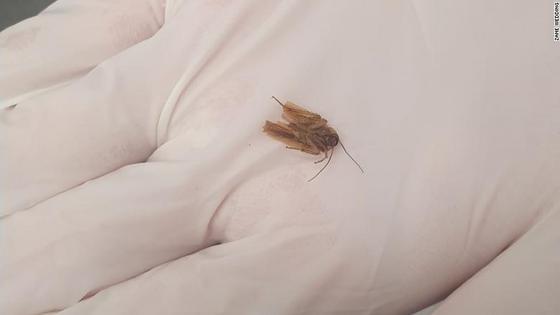 (UPI) A New Zealand man who initially thought he had water trapped in his ear said the true cause of the blockage turned out to be something far more shocking -- a live cockroach.

Zane Wedding, 40, of Auckland, said he went swimming at a local pool Friday and later felt the sensation of blockage in his ear.

"I used some drops to clear it up and fell asleep on the couch later that night," Wedding told CNN.

He said his ear still felt blocked the next day, so he went to see a doctor, who advised him to try using a hairdryer to dry up the water inside his ear canal.

Wedding said the feeling persisted, so he went to see an ear, nose and throat specialist on Monday.

He said the doctor expressed shock immediately upon looking inside his ear.

"She said: 'I think you have an insect in your ear,'" Wedding told the New Zealand Herald.

Wedding said it took the doctor about five minutes to extract the cockroach.

"Every time she touched it I just imagined her squishing a cockroach into my eardrum, so I wasn't the perfect patient," he said.

Wedding said there was "instant relief" when the insect came out.

"I felt a pop as soon as the doctor pulled it away," he said.

He said the encounter left him with lingering feelings of disgust.

"It still gives me the creeps. We've got the fumigator coming in on Friday," he said.

(UPI) A tortoise previously declared the world's oldest living land animal by Guinness World Records has been awarded a second title -- the oldest tortoise ever.

Jonathan, a tortoise that lives on St. Helena, a British ...Read More

(UPI) A Colorado sheriff's deputy called to help wrangle a loose horse climbed onto the panicking equine's back and rode the animal back to its home.

(UPI) Animal rescuers in New York assisted a raccoon found by a homeowner with its head stuck in a jar.

The Strong Island Animal Rescue League said the Cutchogue homeowner contacted the group after having no luck finding ...Read More

(UPI) A Canadian man collected a $71,000 prize from a scratch-off lottery ticket just five months after winning an $80,000 jackpot from a ticket bought from the same store.

(UPI) A California city in which thousands of crows have become a public nuisance is turning to a potential high-tech solution: lasers.

Residents of Sunnyvale said the crows frequently are seen flocking over the downtown ...Read More

(UPI) An Ontario martial artist broke her second Guinness World Record by teaming up with a student to perform 178 kicks in 60 seconds.