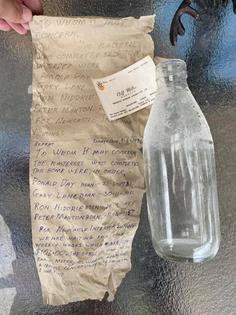 (UPI) An Australian man renovating his home found a message in a bottle concealed between two walls, and was able to find one of the construction workers who wrote the note nearly 50 years earlier.

Matt Streatfeild, of Newcastle, New South Wales, said a glass milk bottle was found between two walls in his home during a recent renovation project, and inside was a note signed by four construction workers who built the walls decades earlier.

The note, dated April 5, 1974, lists the workers who completed the project and explains the project was among their first after converting to the metric system.

"You always hear the legend of messages in a bottle, but you never think you'll find one in between two walls in your own house," Streatfeild told NBN News.

Streatfeild posted photos of the note to Facebook, and was later able to get into contact with Ron Niddrie, one of the workers who authored the message.

"One of these little mementos has paid off," Middrie said. The fact that it was 47 years ago was even more of a shock.

Streatfeild said he plans to return the bottle to its former home when the renovation project is completed, along with a message in a bottle of his own.

He said he is planning to include a "little face mask from 2021 and a bit of a description of how life's been for the last couple of years."

(UPI) A plumber working at Joel Osteen's mega-church in Houston found a large amount of money hidden inside a wall seven years after $600,000 was reported stolen during a break-in.

The plumber, who identified himself only...Read More

(UPI) An animal sanctuary in North Carolina is attempting to recapture an umbrella cockatoo that escaped from its closure during a break-in.

(UPI) A New Jersey family received a shock when a giant chunk of ice crashed through the roof of their home and ended up in the kitchen.

Kim Paradise said she was giving medicine to her baby at the family's Marlton home ...Read More

(UPI) A goat entered a government office in India and was caught on video walking off with a file full of papers from inside the building.

The video, filmed outside the Panchayat Secretary office in Chaubepur, Kanpur, ...Read More

(UPI) A Maryland man who said he doesn't usually play scratch-off lottery ticket said a "feeling" led him to buy the first $5 ticket he could find -- and he won $50,000.

(UPI) Firefighters in Massachusetts put their cowboy skills to the test when a trio of escaped horses went trotting along a road.

The Topsfield Fire Department said in a Facebook post that the three horses escaped from ...Read More