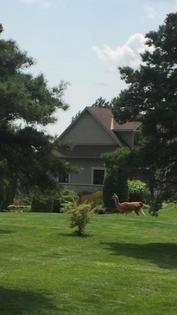 (UPI) Animal rescuers in Ontario are trying to find a loose llama spotted wandering through residential neighborhoods in a rural area of the province.

The Cambridge Humane Society said the llama was spotted multiple times this week in the Arkell and Puslinch communities, south of Guelph.

Rudy Gwinner snapped a photo of the llama about 2:30 p.m. Wednesday as he was driving home from work.

"I thought, is this a horse? It wasn't a horse because it wasn't that size," Gwinner told CTV News. Then I realize, it's a llama!

Gwinner said he kept a distance from the animal, which appeared to be about 7 feet tall and up to 400 pounds.

"I got out of my car and I stopped and it looked at me and I went to the other side of my car, but I thought I'll stay at my car because I know they can be possibly vicious because they protect sheep," he said.

Tanya St. Michel spotted the animal a few hours later about a mile away. She said she attempted to capture the animal, but succeeded only in getting it to leave a roadway for a nearby field.

Penny Burton, who runs a nearby alpaca sanctuary, said she is not aware of anyone who owns llamas in the area, but added that the escaped animal most likely would not attack humans if it is approached slowly with an offering of food.

"I would suggest always approach the animal from the front as opposed to the back," Burton said.

The Cambridge Humane Society is asking anyone who spots the loose animal to contact the organization.

(UPI) A North Carolina State University football fan who lost his wedding ring while tailgating before a game received some help from an unexpected source: Wolfpack basketball coach Kevin Keatts.

(UPI) A rumored monkey spotted in an Indiana city was confirmed to exist when it was caught on video in a hotel parking lot.

(UPI) Organizers of a world record attempt in Chicago said they are hoping to gather more than 178 canine couples to break the record for the world's largest dog wedding ceremony.