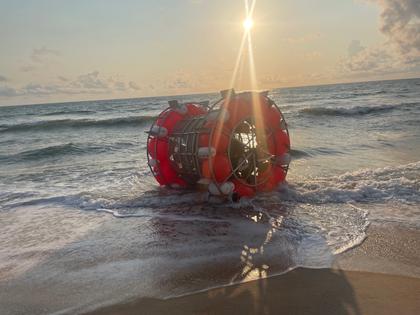 The Flagler County Sheriff's Office tweeted photos showing the cylindrical object on a beach in the Hammock area.

"We are happy to announce that the occupant of the vessel is safe with no injuries," the sheriff's office tweeted.

Reza Baluchi, the occupant of the unusual aquatic vehicle, said the vessel is designed to allow him to run across the surface of the water. He said he washed ashore Saturday while attempting to run from the Florida coast to Bermuda.

Baluchi said his run is aimed at helping agencies that need funds.

Previously, Baluchi was rescued from a Hydro bubble near St. Augustine, Fla., in 2014, and in 2016 was rescued again in a Hydro pod off the Jupiter, Fla., coast.

Baluchi said he will not be deterred from his project.

(UPI) A Maryland who called himself "Touchdown Joe" won a $100,000 top prize in the state's new Ravens X5 scratch-off game.

The 57-year-old Silver Spring man purchased the $5 ticket at an Annapolis Wawa, where he and his ...Read More

Public Works Department employee Brian Townsend saw the snake on a sidewalk between Buddy Attick Park and the ...Read More

(UPI) A South Carolina beachgoer had a once-in-a-lifetime encounter when she picked up a shell and found an octopus nestled inside.

Lori McGee was walking on the Isle of Palms when she picked up a whelk shell and checked ...Read More

(UPI) Suriname Vice President Ronnie Brunswijk, 60, became the oldest player in history to play in an international club soccer game when he appeared in a CONCACAF League match in Paramaribo, Suriname.