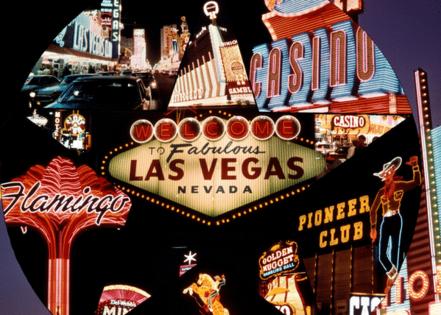 15 vintage photos from Las Vegas' past

As far as major American cities go, Las Vegas is by far the newest.

Unlike New York, Chicago, and Los Angeles (which were all booming metropolises well before the Civil War), Las Vegas wasn't officially founded until the 20th century. When the railroad arrived in 1905, the small settlement quickly went from a dusty outpost to the gambling capital of the world.

While the railroad was the first step in legitimizing Las Vegas, it was the arrival of the mob—and all of its money—in the 1940s that made the city the glamorous destination we know today. Desperate to launder their money, powerful criminals opened luxurious resorts and casinos along a stretch of Route 91 (later the Las Vegas Strip) that attracted visitors from around the world. These hotels then needed performers, like Liberace and the Rat Pack (Frank Sinatra, Dean Martin, Sammy Davis Jr., Peter Lawford, and Joey Bishop), to entertain guests when they tired of the roulette tables and slot machines. The rest, as they say, is history.

Using news outlets and historical archives, OLBG compiled a collection of photos that best exemplify Sin City's short, colorful history from the first casinos to some of the city's most famous residents. 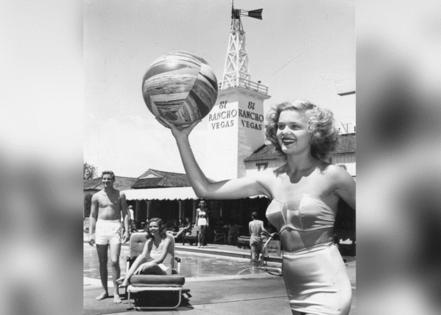 The El Rancho Vegas opened its cowboy-themed doors on April 3, 1941, becoming the first hotel and casino to exist on the stretch of Route 91 that eventually became the Las Vegas Strip. Here, a group of vacationers lounge around the resort's plush outdoor pool. 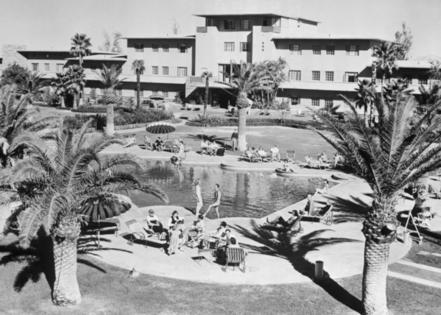 After El Rancho Vegas, it didn't take long for other hotels and casinos to pop up along the proto-Las Vegas Strip. The Hotel Flamingo, owned by famous mobster Bugsy Siegel, was another early establishment known for its Miami beach vibes and glamorous atmosphere. 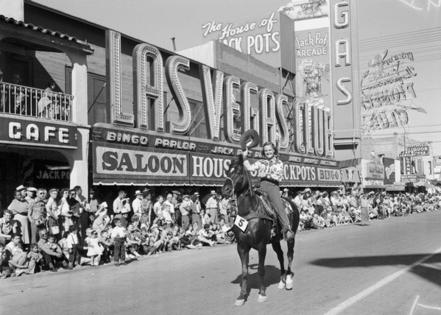 Las Vegas has hosted the Helldorado Days festival (almost) every year since 1935, celebrating the city's Wild West history. Here, a young woman rides along the parade route during the festival's prime years. 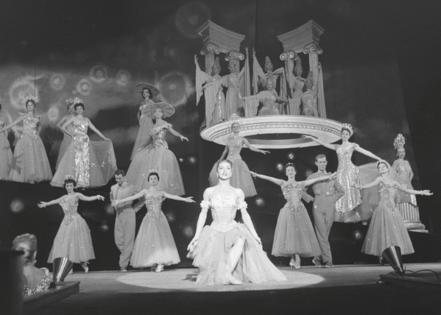 Modeled after the Parisian cabaret, Moulin Rouge was the country's first racially integrated hotel and casino. Though it lasted only six months before being shut down, the resort was wildly successful and helped to inspire racial integration elsewhere in Vegas and throughout the U.S. 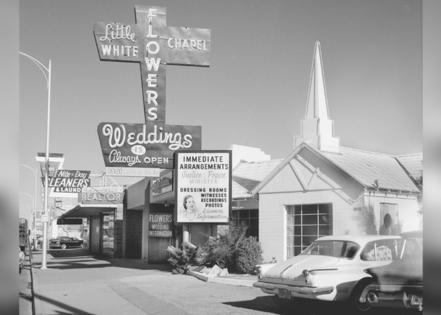 Nevada established itself as the easiest state in the union to get married in as early as the 1930s, waiving the blood tests and waiting requirements many other states mandated at the time. Today, some 70,000 people tie the knot each year at the 50-plus wedding chapels, like the one pictured above, dotting Las Vegas' streets. 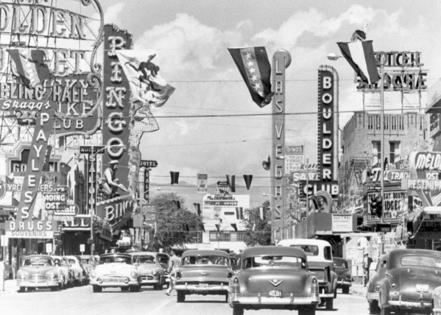 Before the Strip, Fremont Street was the centerpiece of Las Vegas. This part of town was home to the area's best shopping, dining, nightlife, and the first casino. To this day, it's lined with more neon signs than nearly any other street in the country, rightfully earning it the nickname "Glitter Gulch." 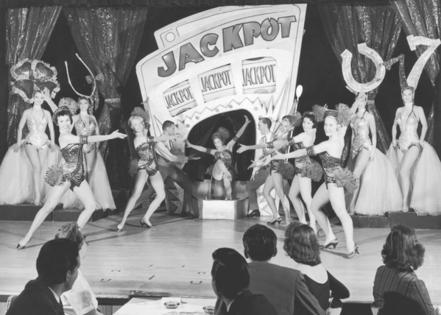 Las Vegas has long been known for attracting some of the world's best performers from Elvis and the members of the Rat Pack to Lady Gaga and Britney Spears. Showgirls in the 1950s began eclipsing musical acts, with their feathers, sequins, and scanty costumes becoming as much of a draw as the nation's biggest pop stars. 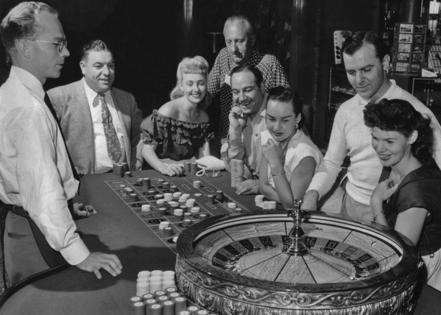 The gambling capital of the world

In March 1931, Las Vegas officially legalized "wide open" gambling. Here, a group of patrons tries their luck at roulette in the mid-1950s. 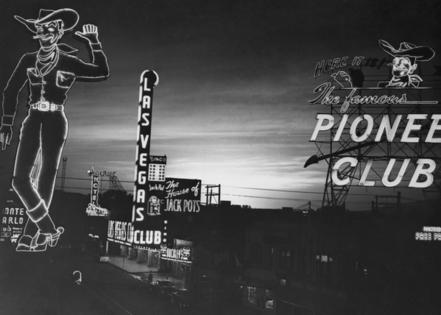 A mere 65 miles north of Las Vegas lies the Nevada Test Site, the most significant nuclear weapons testing location in the continental United States. Above, the glow of an atomic bomb precursor can be seen from the strip: a fairly common occurrence throughout the 1950s. 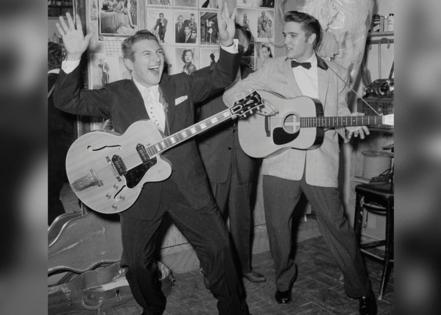 Liberace and Elvis, two of Las Vegas' most famous performers, are pictured here playing backstage at a nightclub. In the 1950s, visitors could see the men perform at any of the city's various clubs and casinos for as little as $5. 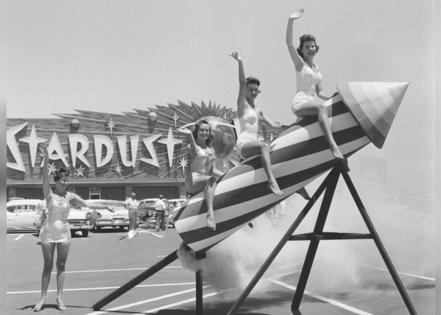 The Stardust Resort and Casino

When the Stardust Resort and Casino opened in 1958, it was biggest hotel in the world with more than 1,000 guest rooms. Though the building was demolished in 2006, visitors can still see the Stardust's signature sign at the Neon Museum. 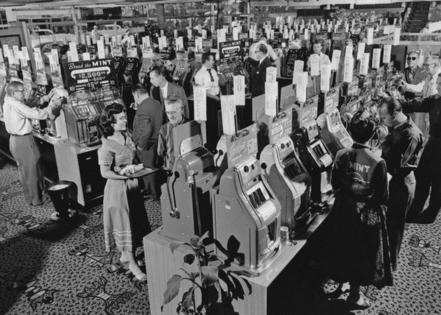 Another Las Vegas fixture of yesteryear, The Mint was located on Fremont Street. The casino's jam-packed gambling floor closed for good in 1988, but was immortalized in Hunter S. Thompson's novel "Fear and Loathing in Las Vegas." 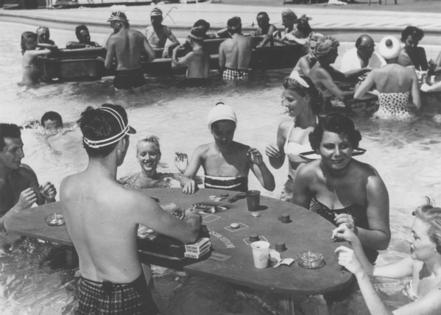 Today, Las Vegas' hotel pools are best known for their all-day, all-night, alcohol-fueled parties. But 50 years ago, they were a little more laid-back, home to floating gambling tables rather than crowded cabanas. 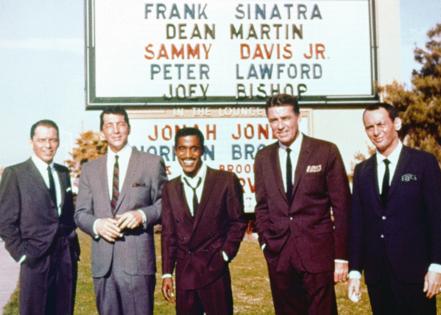 The Rat Pack in Vegas

Here, the Rat Pack poses outside the Sands Hotel and Casino in 1962. It is said that the group's four-week residence there, which drew a total of around 34,000 guests, helped shift the public's perception of Las Vegas from a dirty, mob-owned Wild West town to something much more glamorous and alluring. 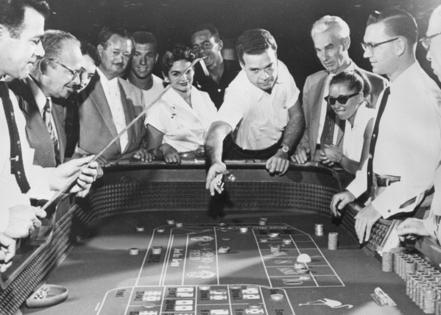 Gambling is one of Vegas' biggest sources of income, reeling in $13.4 billion in 2021 revenue alone. Above, a craps players do their part to help the local economy in 1965.

This story originally appeared on OLBG and was produced and distributed in partnership with Stacker Studio.