Review: 'Bones and All' and 'The Menu' - Dinner Is Served 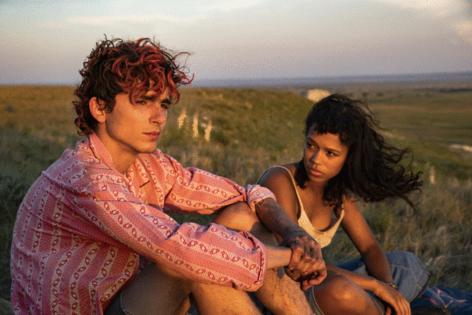 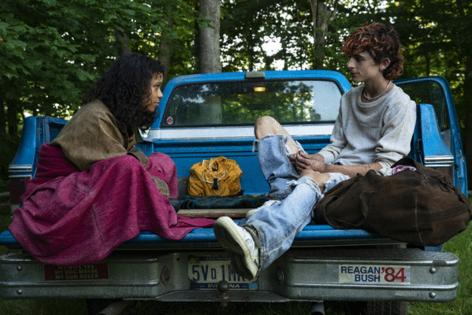 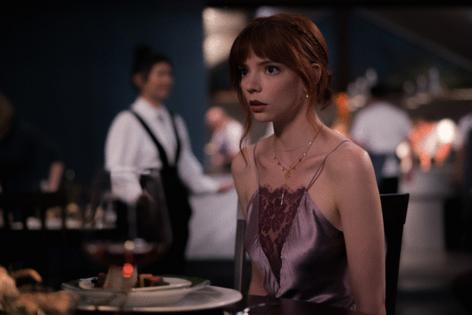 "Bones and All" is a movie that goes for the throat right away. An early scene at a girls' sleepover party hits the screen like a gush of blood and sets a high bar for the terrors that soon follow. The picture is a cannibal love story, but it's filled with unexpected emotion. A mesmerizing paradox, in other words -- one of the year's creepiest and, at the same time, most romantic films.

Taylor Russell and Timothee Chalamet are Maren and Lee, two rootless, flesh-eating loners. Maren has been banished by her loving father (Andre Holland), who can no longer protect her from the consequences of her monstrous addiction. Hopping a bus to Columbus, Ohio, she has the misfortune of encountering an older "eater," the hugely repulsive Sully (Mark Rylance), a middle-aged man with a silly pigtail and a big feather stuck weirdly in his fedora. Sully has many years of backstory, naturally ("I ate my own granddad while they were waiting on the undertaker"), and he'd like to become Maren's mentor. But after an appalling incident in a smelly, fly-filled house, she realizes Sully is dangerous, and moves on to Indiana. There, in a convenience store, she meets Lee, who has a sloppy red dye job and, more important, a truck. Together, they hit the road.

Director Luca Guadagnino ("Call Me by Your Name") deftly balances the movie's two objectives -- watching Maren and Lee fall in love (there's a shamelessly classic shot of them kissing atop a carnival Ferris wheel) and observing them and the other characters slurping up blood and ripping out flesh and sinew with their teeth. Chalamet and Russell (who gives a rich, star-making performance) create flawless portraits of two characters trapped in a nightmare they'll never escape. Adding to the horror are Michael Stuhlbarg and David Gordon Green (the director), who play Jake and Brad, a pair of oddly matched eaters: Jake is the real deal, while Brad is a sort of cannibal groupie (it's probably complicated). These two might want to remain on call for a movie of their own.

Foodies are easy to mock. What are we to make of people who have no hesitation about dropping $1,000 on dinner for two? And how many of us would ever, with a straight face, shell out top dollar for something like espuma de humo -- the "smoked water foam" that was once served at Spain's feverishly popular El Bulli -- or the duck specialty of "leg, brain and heart served with claw, feather and beak" that was once on offer at Copenhagen's renowned Noma?

The whole gastronomy scene can seem faintly ridiculous. But is it any sillier than a passion for high-end clothing ("Friday Night Lights" author Buzz Bissinger once admitted to owning a $5,000 pair of Gucci pants) or top-shelf audio equipment (a pair of Klipsch AK6 floor-standing speakers will set you back quite a bit more than $16,000)?

No, I think extreme foodies are so often singled out for abuse because their naked hunger for status is so obvious, and therefore pathetic. But now they have a movie to call their own. "The Menu," directed by TV veteran Mark Mylod ("Succession," "Game of Thrones"), examines the fine-dining game in the hothouse setting of an ultra-exclusive restaurant called Hawthorn, which is remotely located in the Pacific Northwest, on an island accessible only by yacht. Twelve people -- the maximum number of patrons the place can hold -- have assembled to make this trip. Each of them has paid $1,250 for the privilege. Among them is an especially pathetic foodie named Tyler (Nicholas Hoult), who is accompanied by a young woman called Margot (Anya Taylor-Joy). Tyler was originally to have brought along his girlfriend, but she dumped him at the last moment: thus, all of a sudden, Margot.

Waiting for this group to arrive is Hawthorn's iron-willed chef, Julian Slowik (Ralph Fiennes). "Chef," as his adoring kitchen crew calls him, is not happy about Margot's unplanned appearance. He had a specific reason for inviting each of the evening's guests. One of them, Lillian Bloom (Janet McTeer) is a self-important restaurant critic. Two others, Anne and Richard (Judith Light and Reed Birney), are a wealthy couple who have dined at Hawthorn so often they no longer notice or care what they're eating. Then there's a fading movie star (John Leguizamo) and a trio of inebriated tech bros -- expense-account idiots of a sort that Julian abhors -- and a mysterious little old lady about whom nothing is known, apart from the fact that she appears to be drunk. Presiding over all is Chef's icy Asian majordomo, Elsa (Hong Chau), who's more than a little scary.

The movie is set up like an Agatha Christie mystery, with the characters confined to a single, increasingly claustrophobic location. It also has the trappings of a horror tale (blood is shed, and not only by luckless livestock) and some lively talk, too. Informed that an upcoming dinner course will consist of oysters with algae, Margot -- who is decidedly not a foodie -- responds with a grunt: "Pond scum -- delicious." One course consists of a modernist take on the traditional taco, with each tortilla engraved with embarrassing personal information about the guest to whom it's been served. Then there's the Hawthorn wine list, which is especially amusing. (One vintage is described by the sommelier as having overtones of cherry and tobacco, and "faint notes of longing and regret.")

At one point, Margot turns to Tyler, who's been babbling about subtle traces of bergamot he's detected in one dish, and says, "You've taken the joy out of eating." She might be talking to any of these people.

How fitting that a musical biopic about a maker of pop-song parody videos should itself be a parody. And how cool that it should also be as amiable a brain-fry as "Weird: The Al Yankovic Story." In bringing this long-...Read More

These are difficult times for the mad mullahs of Tehran. There they were last month, quietly going about their business of oppressing the Iranian people, which they've been doing for the past 43 years, when a big kerfuffle...Read More

"Stars at Noon" is a dreamy reimagining of the international spy thriller, borne aloft on a cloud of tropical atmosphere and enigmatic romance. The characters are slippery, hard to pin down, and for a ...Read More

The story so far:

1978: In suburban Haddonfield, Illinois, teenage babysitter Laurie Strode meets suburban man of mystery Michael Myers for the first time. She is drawn to him (sometimes with a great big...Read More

How's your history? Do you remember a 1933 coup attempt in which a group of Wall Street fat cats plotted to overthrow President Franklin D. Roosevelt -- a hateful socialist, in their view -- and replace him with someone ...Read More