Reviews: 'The Unbearable Weight of Massive Talent' and 'The Northman' - Nicolas Cage Back in Action and Alexander Skarsgard Howling at the Moon 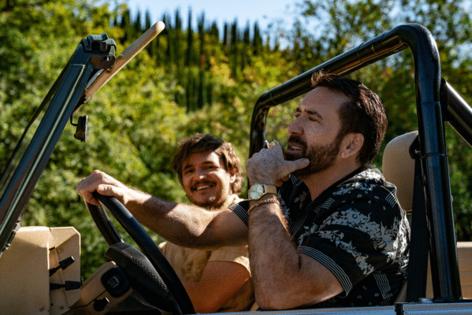 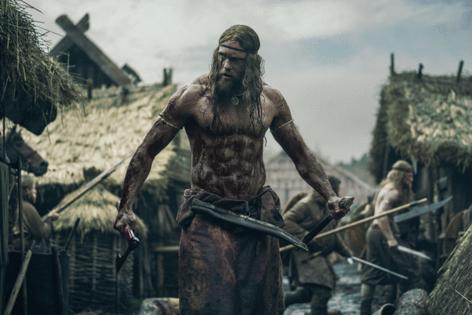 Why do we love Nicolas Cage? How could we not? Like the protagonist of "Drive Angry," one of his many bad-or-at-least-baddish latter-day movies (it's the one in which he survives an encounter with Amber Heard), Nic has gone to hell and back for us, returning each time with at least a few scorched crumbs of entertainment, sometimes more. Last year alone he gave us three new films. One, "Prisoners of the Ghostland," a hookup with Japanese cult director Sion Sono, was a sort of horror Western, and quite awful. Another, "Willy's Wonderland," a kind of animatronic slasher flick in which Nic played the janitor at a demon-infested funhouse, was at the very least not dull. And the third, "Pig," a sweet tale about a backwoods truffle hermit, was a reminder to never, ever write Nic Cage off.

Nic's latest, "The Unbearable Weight of Massive Talent," is a reminder to keep remembering that. Written by two Nic nerds, Kevin Etten and Tom Gormican (who also directed), "Unbearable Weight" uses the highs and otherwise of Cage's 40-year film career and the gaudy financial tribulations of his personal life to concoct a shoot-and-shout action movie of the sort in which the actor himself once loomed large at the world box office (think "Con Air," "Face/Off," "The Rock," etc.). It's not baddish.

The "Nic Cage" we meet here is a desperate character. His once-plentiful big-league movie gigs have dried up and he's also broke -- well, Hollywood broke. We can read between the lines here, knowing from nonstop tabloid reports over the past decade or so that Cage was persuaded by rumblings from the IRS, to which he owed multimillions of dollars, to divest himself of many of his most onerous possessions -- the Bavarian castle, the Caribbean island, the collection of Rolls-Royces, the various yachts, the Gulfstream jet. And also to start cranking out bad movies back-to-back-to-back, many of them spewed straight into the maw of VOD streaming.

This is the point at which we encounter "Nic" in "Unbearable Weight." This version of the actor drinks a little too much and has an alienated teenage daughter (Lily Mo Sheen) and a still-caring ex-wife (Sharon Horgan). He also has an agent (an amusingly soulless Neil Patrick Harris) who keeps pointing out that Nic has been making too many smalltime movies, and not enough money from them. However, a potentially lucrative offer has just come in: a request from a billionaire superfan to attend his birthday party on the sunny Spanish island of Mallorca, in the flesh, for a very cool $1 million. Cage has little choice but to accept.

Upon Nic's arrival on the island, where he's greeted by two bumbly CIA agents (Tiffany Haddish and Ike Barinholtz), the movie begins turning into a traditional tale of international intrigue. The spooks tell Nic that his birthday-boy host, Javi Gutierrez (Pedro Pascal), is an international arms dealer who needs to be taken down. Nic becomes conflicted about this, since Javi turns out to be a sweet guy -- and such a huge Nic Cage fan! He's even turned one room of his swank clifftop home into an elaborate Nic Cage temple, filled with photos and memorabilia. ("Is that the 'Mandy' chainsaw?" Nic asks, being shown around.) Unfortunately, Javi also has an idea for a movie, and he's already written a script, and of course he wants Nic to read it and see if... you know.

The structure of the story allows for a steady stream of Cage movie references, from "Gone in 60 Seconds" and "National Treasure" to "Captain Corelli's Mandolin" and the incomparable "Wicker Man" ("Not the bees!"). There's also a running "Paddington 2" gag that eventually pays off quite cutely without making us choke.

Limited by the lack of a true money-burning blockbuster budget, the filmmakers nevertheless do a creditable job on the requisite car chases and explosions and longform bullet blizzards, although little of it quite rises to the level of its bigtime cinematic models. Which doesn't matter, actually. The real story here is the affectionate friendship between Nic and Javi -- and the comedic ease with which Cage and Pascal swat their genial comedic lines back and forth. We can see that "Nic" is having fun -- and maybe Nic, too: "Spycraft, subterfuge -- I can see me doin' more of this."

The possibly intended effect of "The Northman," Robert Eggers' new Viking horror party, is to simulate the experience of being beaten about the ears, at length, with a longboat oar. The thundering, drums-of-Odin score, by U.K. electro specialists Robin Carolan and Sebastian Gainsborough, is a perfect accompaniment for the movie's raging, bloody violence, and the foul compost of mud and snow and noseless faces on display should be enough to scotch anyone's rash thoughts of ever moving back to the 9th century.

The director, Robert Eggers, is an inspired creator of cheerless new worlds: the spirit-haunted countryside of 17th-century New England in "The Witch" (2015); the smothering horror of two 19th-century watermen assaulted by strange visions in "The Lighthouse" (2019); and now the cold, merciless Viking age in Ireland and Iceland. Eggers's commitment to the unrelenting brutality of the life lived in that long-ago time is mesmerizing (he has talked about the extensive period research and consultation he carried out before embarking on this project), and his decision to bring the Icelandic poet and novelist Sjon aboard to co-write the script may account for some of the film's lyrical atmosphere. (Sjon once recorded a single with the Sugarcubes, Bjork's old band, and has collaborated on some of the singer's solo albums since then; her presence in the cast of this movie -- playing a spooky seeress who delivers a consequential prophecy -- is thus no surprise.)

The story has the dark power of a tribal tale passed down through generations. A young prince, Amleth, sees his father, King Aurvandil (Ethan Hawke), murdered by the archers of his wicked uncle, the king's brother Fjolnir. Amleth vows to be relentless in his quest for vengeance, both for his dead father and his mother, Queen Gudrun (Nicole Kidman), who has been taken by Fjolnir as his own wife. Amleth grows up to be Alexander Skarsgard, ripped and sweaty, and in his search for Fjolnir falls in with a boat full of slaves, among them the Slavic beauty Olga (Anya Taylor-Joy, the star of Eggers's "The Witch").

In a more old-fashioned sort of Viking movie, more old-fashioned adventures would surely be had. But Eggers sees in this world only a never-ending struggle to survive -- especially for captive women: virtually all the women we see in this movie are in chains, or on their way to be raped or otherwise abused. That Eggers presents this casual brutality without emphasis makes it all the more chilling.

The director has filled the movie with ill-met spirits, like the terrifying Mound Dweller -- the centerpiece of an artfully low-lit fight scene -- and whatever it is that inhabits these primitive men as they prowl their icy land draped in wolfskins and howling up at the star-crowded sky and wonder at the alien ways of the Christians who now move among them. ("Their God is a corpse nailed to a tree.")

"The Northman" is said to be based on a tale that later fed into the writing of "Hamlet" -- a clear possibility. Shakespeare was never like this, though.

Baz Luhrmann's new Elvis Presley biopic is set in an endless present in which Presley's music, a foundational component of early rock and roll, flows out of the blues, country and gospel music that preceded it -- the ...Read More