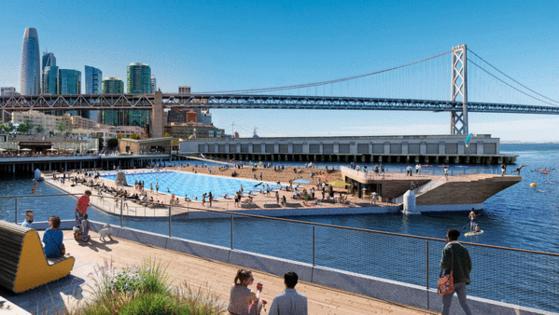 A new proposal would turn an old pier on the San Francisco waterfront into the Bay Area’s first public floating pool, where guests could swim laps, play water polo or lounge in a hot tub while soaking up a view of the Bay Bridge. The plan also includes offices, shops and apartments — and for those who do prefer cold salt water, a protected cove for open water swimming, kayaking and paddle boarding.

Proponents say the project could provide much-needed opportunities for locals to become more confident swimmers, in a city that is surrounded on three sides by water but has limited access to pools. But some neighbors already have raised objections to the project’s proposed residential towers and questioned the need for a pool. And developers have years of hurdles to jump through before they can even break ground.

“I think this could be a really cool place where you have all sorts of people coming in, first learning to swim in the warm pool and then braving the bay maybe, or getting on a stand-up paddle board,” said Jesse Blout, founding partner of real estate investment company Strada Investment Group, which is backing the proposal along with developer Trammel Crow Company. They released a revised proposal for the project last month.

The development would replace Piers 30-32 — two connected, dilapidated piers that stretch into the bay off The Embarcadero, halfway between the Ferry Building and Oracle Park, and currently are used as parking. One pier would be turned into 375,000 square feet of offices and 45,000 square feet of retail space. An apartment tower with more than 700 residential units would go up across the street. The other pier would be converted into a heated, Olympic-sized pool floating on a barge.

But first, the developers must go through a gantlet of approvals made especially challenging because the project is on the bay and the piers are state land. Building offices there isn’t allowed without special legislative approval, so they plan to pitch a bill to lawmakers next year that would allow them to proceed. They also need a green light from the Bay Conservation and Development Commission, the California State Lands Commission and the Port of San Francisco — not to mention the city.

If all goes according to plan, the soonest the pool and surrounding development would open is likely 2027.

Several past projects proposed there have fizzled out, including a Golden State Warriors arena and a George Lucas museum, and a group of neighbors is skeptical about this one.

“Nobody’s going to go to a pool on the waterfront where the ambient temperature is several degrees cooler than inland, and you’ve got fog,” said Frank Lavin, who lives two blocks away and is among about 70 neighbors who have added their names to a letter raising concerns to one of the agencies that must approve the project.

But some swimmers say the Bay’s first floating pool could make a big splash. The developers say they would partner with schools and nonprofits that can use the pool to teach people how to swim.