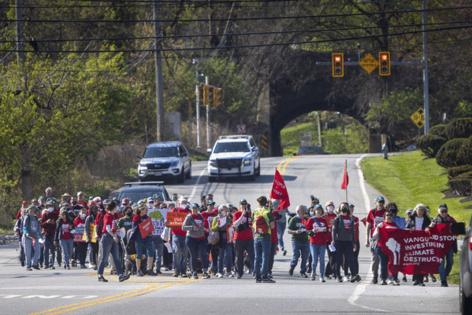 Vanguard Group, the investment giant whose offices in Malvern, Pennsylvania, have been targeted by environmentalists demanding it pressure companies to stop burning carbon fuels, now faces backlash from states who say its efforts to address climate change threaten investment profits for pension funds and other clients.

Attorneys general for Texas, Ohio, Indiana, and 10 Southern and Great Plains states on Nov. 28 filed a protest with the Federal Energy Regulatory Commission (FERC), seeking to block Vanguard from buying electric-power utility company shares for the next three years.

They cited Vanguard’s attempts to pressure utilities into disclosing fossil-fuel pollution and its agreements with environmental organizations that want investors to push to eliminate natural gas and coal plants altogether. In a statement, Vanguard insisted it remains committed to collecting higher profits for its customers.

Vanguard’s index funds and other investment products own 8% to 10% of the nation’s publicly traded utility stocks, not to mention their bonds, according to U.S. Securities and Exchange Commission data. That includes more than $60 billion Vanguard has invested in just the 10 largest utility stocks, including Exelon, American Electric Power, and Duke Energy, for example.

“Yes, it would be a problem for the index funds” if the FERC stopped Vanguard from buying power companies, though Vanguard might be able to substitute stock options or other securities, said Dan Wiener, chairman of Adviser Investments in Newton, Mass., and a longtime Vanguard observer.

“This gets at the heart of what happens when index funds get too big,” he added, leaving them vulnerable to pressure from special interest groups and politicians.

Vanguard isn’t the only big investment company pressured to placate both climate activists and pro-fossil-fuel partisans. Florida on Thursday said it would withdraw $2 billion in stocks and bonds from Vanguard’s larger rival BlackRock, accusing the company of putting environmental concerns above profits.

“I don’t trust BlackRock’s ability to deliver,” Jimmy Patronis, the state’s chief financial officer, said in a statement. He said BlackRock boss Larry Fink “has leaned heavily into Environmental, Social and Governance standards to help police who should, and should not, gain access to capital,” a “social engineering project” that “has nothing to do with maximizing returns,” he said. “The Florida Treasury will be taking its business elsewhere.”

BlackRock, in a response, predicted that it will be Florida’s “political initiative” of dumping its “high-quality investments,” not BlackRock’s efforts to collect more data from carbon emissions or to encourage companies to add female and minority corporate directors, that will end up depressing the state’s investment returns, Reuters reported.