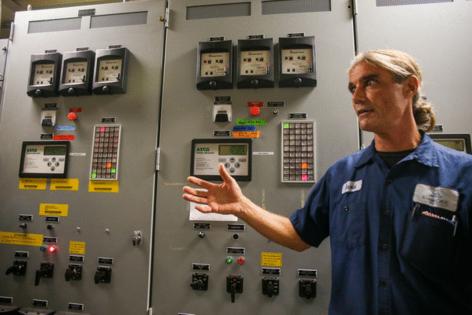 At a sprawling sewage treatment plant in north San Jose, California, engineers are slowly perfecting the ideal temperature for a smelly mixture of bacteria and human waste as the stew churns inside four massive air-tight cauldrons.

The plant, the largest wastewater treatment facility west of the Mississippi to produce water clean enough to be discharged into a sensitive ecosystem like San Francisco Bay, is experimenting with new heat-loving bacteria that excel at turning poop into compost and energy — harnessing the power of dangerous greenhouse gases.

“It’s like making bread or making yogurt,” said civil engineer Mariana Chavez-Vazquez, who oversaw the renovation of the cauldrons. The bacteria “need to be happy. They need to be a certain temperature. If you put in something that they don’t like, they will go sour.”

In the global effort to reduce methane, a greenhouse gas that’s 72 to 84 times more potent than carbon dioxide, municipalities across California are facing increasing pressure to comply with laws designed to keep the dangerous gas from escaping into the atmosphere.

Many wastewater treatment plants, including the San Jose-Santa Clara Regional Wastewater Facility and the Santa Cruz Waste Water Treatment Facility, are already doing their part by trying to ensure that their waste doesn’t go to waste, and instead turning it into biogas, a blend of gases dominated by methane, that can be used to generate power.

In San Jose, that process is done with finely tuned cauldrons, also called digesters. From the odorous, bubbling mixture sealed within the digesters, the plant already extracts enough fuel to power half of the facility. But that amount will increase once the higher-temperature bacteria, introduced in October, settle into their natural, methane-creating rhythm.

Until the 1970s, facilities burned the combustible biogas into carbon dioxide and nitrous oxide. In fact, wastewater treatment plants were easy to spot because of their blue flame hovering at the top of a tall stack, resembling a lit candlestick.

That changed after the federal Clean Water Act of 1972, when facilities were made to extract some use from methane before it was burned. The result was cogeneration — the creation of electricity from an engine powered by biogas. Hundreds of facilities in California now do it.

As its name implies, wastewater isn’t just water. It’s a mixture of road runoff, raw sewage, toilet paper, wipes deceptively advertised as flushable, and other dirt and plastic flowing through the sewer system. When treated with bacteria, the sewage and other organic solids in wastewater turn into sludge and biogas.

At the San Jose plant, the benefit of finding the ideal temperature for bacteria at around 130 F, Chavez-Vazquez said, is that the new bacteria will eat more organic material from the sludge than their lower-temperature predecessors. This creates a compact soil that requires fewer trucks to haul it away. And the higher-temperature bugs are capable of generating a larger amount of biogas, composed of a higher proportion of methane, which means more electricity for the plant.