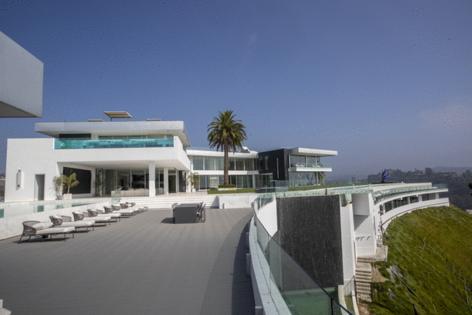 Granted, those who can afford a $50-million home likely aren't sweating a bloated electric bill, nor perhaps the carbon footprint, but experts say the cost of keeping a mansion cool can run well north of $10,000 per month.

Take "the One," a 105,000-square-foot home in Bel-Air that set a record this year when it sold to the highest bidder for $141 million, the most ever paid for a home at auction in America. It's the largest modern home in the country and looks more like a spaceship than an actual place to live.

Last year, a court-appointed receiver tasked with finding a buyer for the property told The Times that the monthly electric bill was $27,000. At the time, the air conditioning only worked on one level.

Lawrence Castillo, president of A/C company Brody Pennell, estimated that when the home is working at full capacity, the bill would be around $50,000.

Castillo, whose company services more than 30,000 homes per year around the Westside and San Fernando Valley, said residential air-conditioning systems are generally split into zones so they can cool separate, specific areas depending on which part of the house you're occupying at a given time.

So while the typical home may have a single HVAC system that serves two zones — one upstairs, one downstairs — Castillo said a house like the One may have up to 50 HVAC systems and even more zones: one for the butler's pantry, one for the bowling alley, one for the movie theater, one for the candy room, and so on. A series of ducts snakes off each system delivering air to each zone, and residents can control which zones have cool air from thermostats or their phones.

Mansions of such magnitude are often used for events or parties, during which the entire house would need to be cooled, but on a typical day, residents use a much more limited space. The estate has 21 bedrooms, but it's highly unlikely all 21 would be used every night. The living room, kitchen and dining room would be cooled on a regular basis, but spaces such as the beauty salon and nightclub probably aren't set at a crisp 70 degrees all the time.

As California's increasingly punishing summers force residents to conserve, several celebrities such as Kim Kardashian and Kevin Hart have been accused of violating drought restrictions, using hundreds of thousands of gallons of water to keep their luxury compounds lush and green. Electricity isn't quite as controlled as water usage, but Castillo said the difference in usage between a standard home and mega-mansion can be staggering.