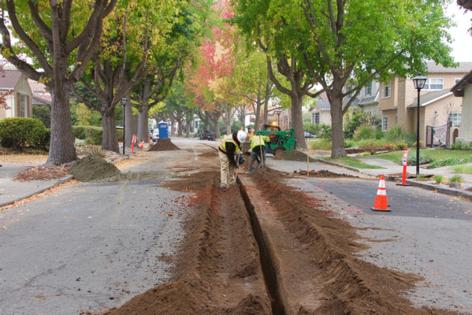 A bill that supporters say will help reduce the incidence of deadly wildfires — especially in the Northern California service territory of Pacific Gas & Electric — by streamlining efforts to place power lines underground awaits the signature of Gov. Gavin Newsom.

But opponents, saying the legislation undercuts existing regulatory oversight and will lead to higher monthly bills paid by utility customers in areas beyond PG&E's service territory, have urged Newsom to veto the bill.

"The bottom line is that over my time in this Legislature, year in and year out, we have seen massive utility-caused wildfires in Northern California," said Senate Majority Leader Mike McGuire, D-Healdsburg, when he introduced SB 884 in committee in June. "What experts have said, and what we know, is that undergrounding electrical lines reduces fire starts by 99 percent."

The legislation would require utilities in California to submit plans to underground lines in high fire-threat districts to the Office of Energy Infrastructure Safety. The agency would then to approve or deny the plan within nine months.

Should the OEIS accept the plan, the California Public Utilities Commission would also have no more than nine months to approve or reject it.

The bill also requires utilities to file progress reports, hire independent monitors to review their compliance and apply for funding to reduce the costs of their plans to ratepayers. Plus, the Public Utilities Commission would have the power to assess penalties to the utilities if they don't "substantially comply" with their undergrounding plans.

"For far too long, America's largest utility — PG&E — has failed its customers and made California unsafe," supporters of SB 884 argued in a legislative analysis. They say the legislation will "provide a path to expedite" the undergrounding of 10,000 miles of PG&E utility lines, make sure the utility adheres to timelines and save money for customers in the long run.

Taking existing overhead transmission and distribution lines and burying them underground helps prevent the chances of power lines falling during exceedingly windy conditions and igniting wildfires when they hit the ground or contact utility equipment.

That's what happened in the San Diego area during the 2007 Witch Creek, Guejito and Rice wildfires that destroyed more than 1,300 homes, killed two people, injured 40 firefighters and forced about 15,000 to seek shelter at Qualcomm Stadium.