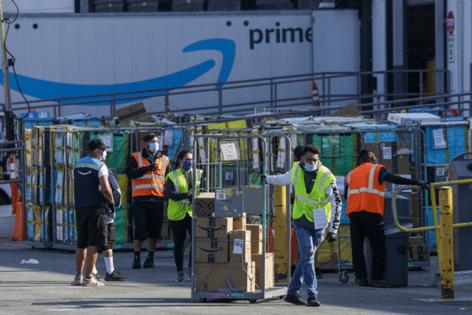 Holiday bargain shopping is starting extra early this year. And that could be good news for shoppers, even if it signals slightly worrisome things for the economy.

Rival retail giants Wal-Mart and Target have already signaled plans to kick off holiday sales earlier than ever, setting the stage for a long holiday shopping season with significant discounts. With warehouses and store shelves suddenly full of inventory after two years of supply chain disruptions, deals will be easier to come by than they have since the start of the COVID-19 pandemic, say retail experts.

"It is absolutely good news for consumers," said Mark Mathews, vice president for research, development and industry analysis for the National Retail Federation, a trade group for the nation's retailers. "Now all of a sudden we are almost back to pre-pandemic times when you have too much of this, too much of that so you have to discount."

Amazon's bonus sales event may be a sign that retailers are concerned that Americans will keep a tight grip on their wallets this holiday season because of fears over inflation, rising interest rates and predictions of an oncoming recession.

An Amazon spokesperson said that the company — with annual sales of more than $470 billion last year — added the second online sale to help overcome such worries.

"In light of inflation and economic head winds, we want to help members save throughout the season," said Amazon spokesperson Deanna Zawilinski.

Amazon started Prime Day in 2015 to attract new subscribers, who now pay $139 a year for shipping discounts, video streaming and other perks. But this is the first year that Amazon has added a second deal "holiday" in the same year.

"Amazon is trying to cover its bases and trying to capture the bulk of the holiday spending," said Venkatesh Shankar, a marketing professor at Texas A&M University.