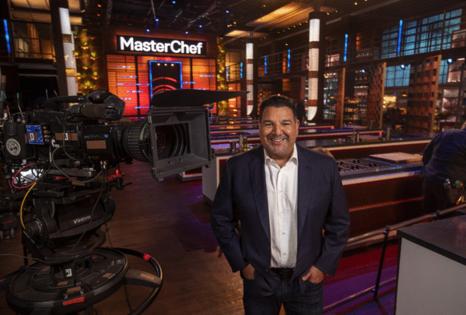 It was 1986, and the incoming freshman, a self-described TV addict, assumed the course would teach Latino teens like him how to build television sets. After all, this was an era when students in working-class communities, including those at El Monte's Mountain View High School, were encouraged to take auto or wood shop to prepare for a blue-collar life.

"When I found that it was actually to make television, I was blown away," Abrego said.

That class would prove instrumental in shaping ambitions that would take him beyond El Monte. By his junior year, Abrego was lugging around a bulky TV camera, interviewing fellow athletes, cheerleaders and the principal for a student-produced show, "What's Up," which borrowed heavily from "The Arsenio Hall Show" — albeit with less glitz.

Still, the 50-year-old Abrego often has felt out of place in a business that has long embraced white executives, many from privileged backgrounds. It bothers him that Hollywood has been slow to recognize the effects of its insular attitudes, which can seep into programming consumed by millions.

Latinos, in particular, have been shut out of entertainment's upper ranks even as the industry has pledged to do better. Rising concerns about the glaring disparity have reached boardrooms and Congress. Last fall, a Government Accountability Office report found that Latinos — 18% of the U.S. workforce and nearly 40% of California's — comprise only 4% of media executives.

Abrego has been trying to pry open the industry. He serves as chairman of the Television Academy's foundation, its charitable arm, where he and other executives created an internship program to support young talent from L.A.'s disadvantaged communities.

"I've seen how hard it is to get into this business," Abrego said. He's also familiar with assumptions made about Latinos. "I've had enough keys thrown at me while standing by a valet stand."