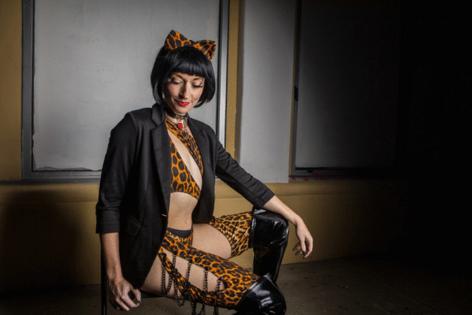 For nearly five months a group of former Star Garden dancers have positioned themselves on the sidewalk on busy nights with picket signs and costumes. They make it hard to enter the bar without first hearing why exactly they believe Star Garden does not deserve your business. They allege it's a workplace plagued by unsafe conditions, a lax attitude toward dangerous patron behavior, and unfair terminations.

The dancers keep a nightly tally on a white board of how many customers they deter; they say they average about an 80% success rate.

"We are very good at our job," said a dancer who goes by the stage name Reagan. "We are very persuasive. We lightly shame."

But after dozens of nights of protests, the dancers on Wednesday tried a new tactic. In a landmark move, they filed a petition for a union election with the National Labor Relations Board, through the established actors union Actors' Equity Assn.

The union bid comes amid a broader push to formalize and bring job protections to a historically marginalized and little-regulated industry.

If the dancers succeed, it would be the first time the century-old union that represents actors and stage managers on Broadway and venues such as the Hollywood Pantages Theatre would include strippers in its ranks. Star Garden would become the first unionized strip club in the U.S. since 1996, when strippers formed the Exotic Dancers Union at the Lusty Lady Peepshow in San Francisco with the Service Employees International Union. Lusty Lady closed in 2013.

"Every worker who wants a union deserves a union and should be able to have the protections of fair wages, safe working conditions, benefits and a workplace free from discrimination and harassment and wage theft and all of the things that the Star Garden strippers are telling us they've experienced. So this feels like the right thing to do," said Actors' Equity Assn. President Kate Shindle.

The owners and managers of Star Garden did not respond to multiple requests for comment.

Star Garden dancers have expressed goals of achieving a recognized union for months. They hope their chances of success will rise with the backing of an established union's resources.