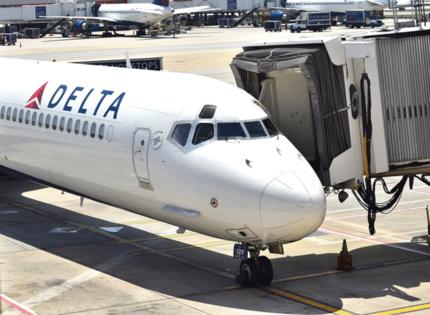 Delta Air Lines said pilots and flight attendants called out sick in June at a rate 50% higher than June 2019 levels, with the effects of the ongoing COVID-19 pandemic straining its operations and contributing to flight cancellations.

The disclosure came as the Atlanta-based airline sought Federal Aviation Administration approval to cut its flight schedule in New York and Washington, D.C. because of the "unforeseen spike" in pilot and flight attendant sick days. Delta told the FAA that its "workforce and flight operations are under extraordinary strain, leaving little margin for operational challenges caused by construction, ATC delays, and weather."

LaGuardia and John F. Kennedy International in New York and Reagan National in Washington, D.C. are unusual in that they are "slot-controlled" airports, requiring airlines to operate a minimum number of flights or risk losing their flying rights.

That's why Delta sought a waiver of the minimum slot usage requirement for those airports, and told the FAA it it is "experiencing significant effects on operations due to higher than expected employee resource and illness-related issues, including unexpected increases in COVID-19-related crew absences," according to the agency. Crew assignments are made far in advance based on demand predictions, according to the FAA.

Delta and other airlines have had hundreds of flight cancellations on some of the worst travel days this summer, frustrating travelers and causing a cascade of other problems including mishandled baggage, long lines and missed trips.

The FAA agreed "for a brief period in the summer of 2022, these pandemic effects constituted a highly unusual and unpredictable condition beyond Delta's control."

The agency on Friday agreed to partially waive the slot usage requirements for Delta in New York and D.C. through Sept. 5, 2022. It said its preference is "for Delta to reduce flights for sale to minimize disruptive, close-in cancellations."

In a statement, Delta said it has worked this summer to restore its operational reliability. It said the FAA's slot relief at New York and Washington, DC airports will allow it to improve service reliability "with minimal impact to customers."

Delta had already in May cut 100 flights a day from its flight schedule for July 1 through Aug. 7, citing COVID-19 case rates driving unexpected absences, combined with the effects of weather and air traffic control delays. The slot use waiver indicates Delta's staffing issues have continued.

"FAA acknowledges COVID-19 continues to complicate crew and staff level forecasting, especially when coupled with pandemic-driven workforce practice changes that have disrupted planning models," the agency said. The Centers for Disease Control and Prevention says that people who test positive for COVID-19 should isolate for at least five days, down from 10 days after Delta CEO Ed Bastian last year advocating for the reduction.

But the U.S. Department of Transportation, the FAA's parent agency, also said it is concerned that this partial grant of Delta's request could lead to close-in cancellations of summer travel plans for consumers "at a time where limited availability exists on alternative flights."

U.S. Transportation Secretary Pete Buttigieg met with airline executives earlier this summer to ask Delta and other airlines to ensure they can reliably operate their flights. The DOT said it has been "closely monitoring" the significant increase in cancellations, delays and "challenges with customer service."

The agency is requiring Delta to offer passengers the choice of a refund or rebooking — including on another carrier as needed — for canceled flights covered by the waiver through Sept. 5 at JFK, LaGuardia and Reagan airports.