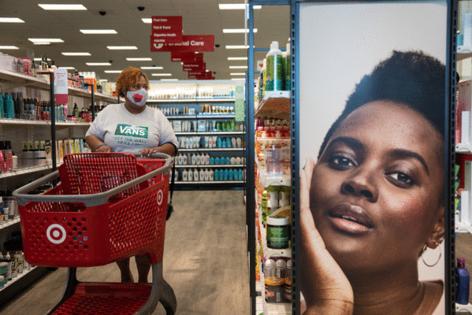 Target Corp. earmarked billions of dollars for Black businesses and communities to address racial equity issues after the police killing of George Floyd two years ago.

The Minneapolis retailer made visible strides in that time, but a review of its benchmarks shows it still has a way to go to meet all of its goals.

Target increased its share of Black company officers, added more year-round products by Black entrepreneurs and expanded its base of contractors. While some experts suggest retailers' interest in diversity is declining, Target executives vow to stay the course.

Target leaders say they had already begun work to better serve Black workers and customers when Floyd's murder on Memorial Day 2020 led to more calls for action about ending the unfair treatment of Black people in America.

In summer 2020, Target formed the REACH (Racial Equity Action and Change) committee to spearhead some new lofty visions, such as creating retail environments in which Black customers felt welcomed and finding new ways to help grow the prosperity of Black communities.

Target has since added more tangible benchmarks and financial commitments, including promising to contribute $100 million through 2025 to Black-led organizations; spend more than $2 billion on Black-owned businesses, including marketing agencies and construction companies, by the end of 2025; and spend 5% of Target's annual media budget on Black-owned media this year.

Target is not the only company to focus more on diversity and equity since Floyd's death. Retailers including Nordstrom, Sephora, Macy's, Ulta Beauty and the Gap, have accepted the Fifteen Percent Pledge, which was launched in 2020, to advocate for Black businesses to make up 15% of retailers' shelf space.

"The pandemic mixed with social changes has made many consumers demand more from their retailers," said Kim Sovell, a marketing professor at the University of St. Thomas. "I'm not talking about good prices. I'm talking about thoughtfulness."

According to McKinsey & Co., nearly half of consumers they recently surveyed in the United States believe companies should pledge to support Black-owned brands and vendors with a larger percentage of younger consumers, including Gen Zers and millennials, thinking that's important. Also, Black consumers, who have historically been underserved, have hundreds of billions of dollars of buying power that they are willing to redirect, research shows.

Convicted by a jury in January for defrauding ...Read More

Berwyn, Illinois-based Italian beef institution Buona announced Tuesday it would open restaurants outside of the Chicago area and Northwest Indiana under a new franchise program.

Stays of 28 days or more — usually by so-called ...Read More

US stocks ended a volatile session lower after a slew of Federal Reserve officials hammered home their resolve to remain aggressive in their fight against inflation.

The S&P 500 dropped for the sixth straight session, its...Read More

General Motors Co. executives are delaying the timeline for bringing white-collar workers back to the office after backlash from a decision released last week requiring employees to return to in-person work three days a ...Read More