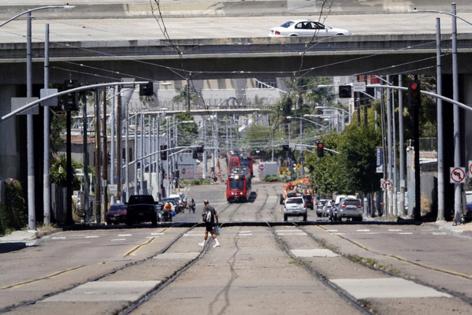 California's minimum wage is likely to rise to $15.50 an hour in January because of inflation, said Gov. Gavin Newsom on Thursday.

Some business leaders have argued they are struggling with rising costs and can't handle another 50 cents an hour. Worker advocates say the increase is needed to combat rising prices. Other advocates argue the increase isn't enough.

The change — the result of a 2016 law signed by then-Gov. Jerry Brown — requires that any inflation growth above 7 percent triggers an even higher minimum wage.

Q: Will a $15.50 minimum wage hurt or help California's economy?

HELP: Maybe. Rising wages contribute to higher inflation and higher inflation drives higher wages in times of full employment. The Fed is trying to manage this by raising interest rates to tame inflation while maintaining a low unemployment level. If the Fed is successful, the increase in minimum wage should help. But, if it's not, California and the rest of the country will be faced with either a recession or runaway inflation.

HURT: Any additional costs that small businesses must incur come from an already strained bottom line. As a result, small business must reduce costs in other areas (layoffs or automation) or pass on the increased costs to consumers for goods and services. Small-business owners are still trying to recover from the economic effects of the pandemic as well as supply chain issues, rising inflation, and labor shortages. Increasing labor costs could mean that some small businesses may either decide to close their doors or move to a more business-friendly state.

HELP: With tight labor markets and high inflation, employers will continue to feel pressure to raise wages and a number of California cities will have minimum wages at $15.50 or higher. Therefore, the increase in the state minimum wage may not have much effect. Impacted workers are likely to spend their additional income. But some small businesses will cut back on workers' hours if they are unable to pass along higher expenses to customers.

HURT: Businesses are struggling to fill vacancies in all industries and competition has led employers to pay more than minimum wage for entry-level positions. Fast food restaurants are offering up $20 to start, and in return forcing other industries to follow suit. Companies who can only afford to pay employees minimum wage will soon be forced to raise salaries if they want to stay in business. In the current economic environment, raising the minimum wage to $15.50 will not solve any problems.

HURT: A minimum wage increase rightfully attacks labor exploitation, but that enemy is generally beaten. Exploitation is the exception, not the norm now. Large organizations — corporations, governments, large charities — will automate, gigify, or outsource to non-Californians. Small-business owners, whose profits pay for their families' livelihood, simply will hire fewer. I agree with Yuval Harari: the enemy is irrelevance. This increase makes more Californians irrelevant. More people without meaningful work to do — that will hurt.

HURT: Preventing employers from hiring inexperienced and/or unskilled workers deprives them of the capacity to attain work skills and obtain experience. Minimum wage laws establish barriers especially for young and poor workers wanting to find or acquire work, which is counterproductive to a functioning economy. Businesses offer higher wages seeking competitive advantages to attract and retain workers. The market works best in striving toward improving productivity while seeking efficiencies that result in a healthy, flourishing economy.

HELP: With the millions of job openings, in every category, in California, anyone working at minimum wage or slightly higher needs to move to a better-paying job. When minimum wage went up to $15 an hour, the majority of employers were paying $18 to $20 an hour already. This raise will be a non-event and is valid with inflation running over 7 percent. States that still have their minimum wage at $7.25, the federal minimum wage, really do need to get their act together.

HELP: In fact, most workers are salaried above the minimum wage benchmark, so it's impact will be minor. Workers require higher salaries to remain in California, and most employers have sufficient pricing elasticity to accommodate higher wages. There is little good that is achieved by underpaying people, particularly in an ever-increasing cost marketplace. I do wish there was an exception to the wage minimum for starter jobs for teenagers, who benefit from job experience.

HELP: The tight labor market has already forced the wage above the minimum wage for many businesses, so fewer workers and businesses will be impacted by this increase. The increase was triggered due to the high inflation level the state and the rest of the country is facing. This increase will give a boost to those at the low end of the income distribution, who particularly need it due to the sharp increase in housing prices and rents that the state has experienced.

HURT: Minimum wage increases have been proven to hurt the most vulnerable. It sounds beneficial to low-wage workers, but minimum wage hikes do not reduce poverty and result in fewer jobs. Instead of increasing costs for employers, lawmakers should focus on expanding job opportunities through pro-growth policies, thereby raising wages for all. Minimum wage increases destroy job opportunities for teens and there needs to be a training wage to encourage employers to train them.

HELP:A higher minimum wage helps some people, such as minimum-wage workers who will take home more money, and hurts others, such as low-skilled workers who can not find work because they cost employers more than they contribute to revenue. In the current environment, employers are scrambling to find workers, so I'm less worried about the second effect than I would be in other situations. In addition, the spending power of minimum-wage workers has been eroded by inflation.

N/A: Both. In an economy with labor shortages, minimum wage increases affect very few workers and directly impact consumer prices. It can lead to circular inflationary price pressures, while adding pressure to automate more jobs, reducing labor demand over time. It also hurts the less productive interns and neophyte workers who require much training prior to being worth even a below minimum wage, so it is critical that we allow exceptions for entry and internship positions.