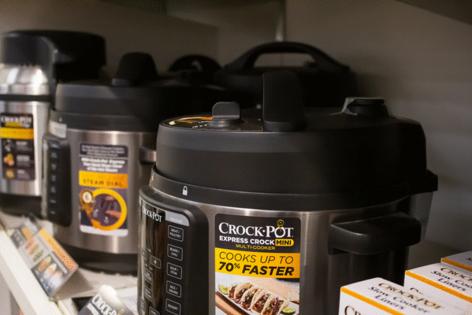 A safety defect in a pressure cooker bought by nearly 1 million consumers has left dozens of users with burns, according to a federal lawsuit filed on Friday.

Her injuries resulted from the pressure cooker’s lid “being able to be rotated and opened while [it] was still under pressure ... allowing its scalding hot contents to be forcefully ejected” onto Alvarez, according to the suit filed by St. Paul, Minnesota-based Johnson Becker.

The model was the subject of a recall by Sunbeam announced by the U.S. Consumer Product Safety Commission in November 2020. Sunbeam received 119 reports of lids detaching from the cooker, resulting in 99 burns “ranging in severity from first-degree to third-degree burns,” the commission reported.

At that point, 914,430 of the units had been sold in the U.S. and 28,330 were sold in Canada. A commission spokeswoman on Monday said the number of consumers who responded to the recall was not readily available.

A report on the commission’s website said that the cooker can pressurize when the lid is not fully locked, which can cause the lid to suddenly detach while the product is in use, “causing burn risks to consumers from hot food and liquids ejected from the product.”

But burn risks are not confined to the model sold by Sunbeam, according to an attorney representing several plaintiffs in a lawsuit against Sunbeam that seeks class action status.

Jason Turchin, a Weston-based attorney, said he’s represented clients who claim they suffered burns from similar defects in at least 200 lawsuits against various pressure cooker makers. More than 100 of the suits have been settled, he said.

All of the cases stemmed from claims that consumers suffered burns when scalding hot contents of their cookers exploded unexpectedly.

The claims are similar because the cookers share common design elements. Just a handful of manufacturers in China make almost all pressure cookers sold in the U.S., Turchin said.

Amazon.com Inc. employees in Bessemer, Alabama, will vote by mail next month in a re-run election on whether to unionize, the National Labor Relations Board announced Tuesday.

Ballots will be mailed out Feb. 4 and must ...Read More

With Boeing having halted 787 deliveries and 737 MAX deliveries ramping up only slowly, Airbus far outproduced its U.S. rival in 2021, making the European jet maker the world's top commercial airplane company for the third...Read More

Ohio is believed to be in the running for what would be its biggest economic development prize of all time: a major computer chip-making operation with a potential total investment of tens of billions of dollars.

The outlook for 2022 and beyond is increasingly blurry.

By that I mean global sales of eyewear and other vision products will top $209 billion over the next five years, according to a recent forecast by market researcher ...Read More