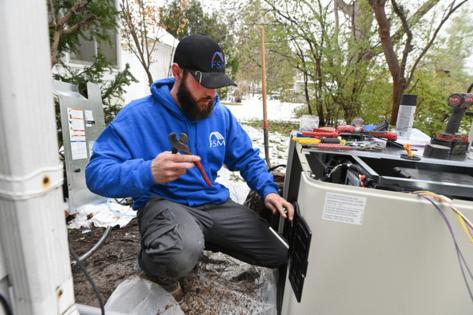 YPSILANTI, Michigan — Electricians are booked and busy with customers waiting months to get standby electric generators installed on their properties as manufacturers face parts shortages and installation companies are in need of journeymen.

Still, customers are willing to shell out thousands of dollars for the equipment that offers power from natural gas, propane or diesel when the electrical grid doesn't. Remote work, virtual learning and summer storms that knocked out power for days have caused a surge in demand in southeast Michigan and across the country. There's no sign of slowing down as infrastructure ages and people are increasingly relying on an electric supply to power things like electric vehicles.

"There were four major outages this summer where the phone just didn't stop ringing," said Mark Troutt, general manager at Kelley Brothers LC in Livonia, Michigan, which is booked into March for Generac generator installations. "We could double our business if we could get more generators. We're selling at least 70% over last year, which was over 70% from the year before. The only choke point is equipment and people to put them in."

Keith Clark, 54, and his wife had discussed getting a generator three years ago when they moved to their home in Farmington Hills, Michigan. This summer made them fed up after losing power five times in six months, with the longest lasting a day and a half. When an outage led them to replace the condenser on their new refrigerator, they ordered a Generac generator in October, which won't be installed until January.

"I'm just tired of not having power and having to throw out your food," Clark said. "It's an insurance just in case it happens again."

Clark is paying $12,000 for his generator, plus an extra $1,000 for a new meter from Jackson-based utility Consumers Energy. Some may cost a few thousand less, but it's becoming increasingly common to pay about that much or more to power a whole house, according to generator dealers, with about half the cost for the equipment and the other half for labor to install it.

An installation job requires an electrician journeyman, at least one other person and typically takes about a work day to complete. With high demand for good electricians, a shortage of skilled tradesmen also is contributing to wait times for generator installations.

"We put a help wanted ad out, and you might get one or two guys to come in," said David Frey, master electrician at Livonia-based Foundation Systems of Michigan, who has hired from as far as Alabama and Washington to install mostly Cummins generators. "They might fit your profile. Some of them don't. Every good electrician out there is working."

About 5% of U.S. households have a generator. Generac Holdings Inc. represents about 80% of the standby generators sold in the country. Residential product sales grew 33% year-over-year to $609 million in the third quarter alone, and the Wisconsin-based manufacturer is on pace to grow its revenue by more than a $1 billion this year, according to the company.