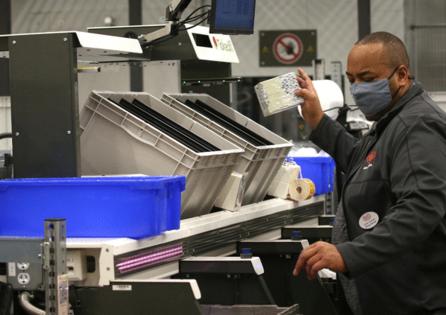 Located in a former Hobby Lobby next to a bricks-and-mortar Jewel store, the high-tech, 20,000-square-foot warehouse will be able to fill 1,000 online orders a day, expediting grocery deliveries to shoppers within 20 miles.

“This MFC (micro-fulfillment center) carries approximately 6,500 items, which will cover about 60% of what you’d normally see in an online order,” Mike Withers, president of Jewel-Osco, said at a ribbon-cutting ceremony also attended by Gov. J.B. Pritzker. “Then the rest of the order will be selected from the Jewel-Osco that’s adjacent to this building.”

The fulfillment center cost $7.6 million to build out and will be staffed by 27 e-commerce workers, using an automated system to prepare orders for delivery. Jewel plans to open a second facility at Roosevelt Road and Canal Street on Chicago’s Near West Side next summer, Withers said.

The system uses storage-and-retrieval technology to shuttle products to a sorting area, where Jewel-Osco “pickers” can fill up to four orders at once, speeding the process. Robots move the completed orders to another area for pickup customers or third-party delivery services.

The pandemic has fueled a major shift to online grocery shopping, with sales at retailers nationwide growing by 54% in 2020 and projected to increase about 18% to nearly $113 billion this year, according to eMarketer.

Within five years, online grocery sales are projected to hit $263 billion, or 20.5% of the $1.285 trillion grocery market, according to an October study by grocery e-commerce company Mercatus.

The study found that more than a third of online grocery shoppers get their deliveries from Instacart, a third-party picking and delivery service that works with a variety of bricks-and-mortar grocery stores. Another 22% get groceries delivered from Amazon Fresh, which started with a warehouse delivery model and more recently opened six bricks-and-mortar grocery stores in the Chicago area, including one in Westmont.

Industry analysts point to Amazon’s $13.4 billion purchase of Whole Foods in 2017 as a pre-pandemic catalyst for the shift to online grocery shopping.

Jewel has been selling groceries online since 2017, according to spokeswoman Mary Frances Trucco. She declined to offer e-commerce revenue figures for the chain.

About 24% of online shoppers get deliveries directly from grocery stores, but Jewel’s new fulfillment center may help the chain take ownership of a potentially rapidly growing segment of its business.

Jewel-Osco has continued to find new ways to engage with Chicago-area residents over the last century, Pritzker said Tuesday, calling the micro-fulfillment center the “latest in grocery innovation” and a “tremendous opportunity” for growth.

Founded in 1899 as Jewel Tea, a horse-drawn delivery service selling tea and coffee, Jewel evolved into the largest Chicago grocery chain, with 188 stores in the city and suburbs. In 2013, Jewel was sold to the privately held Albertsons grocery chain as part of a $3.3 billion deal.