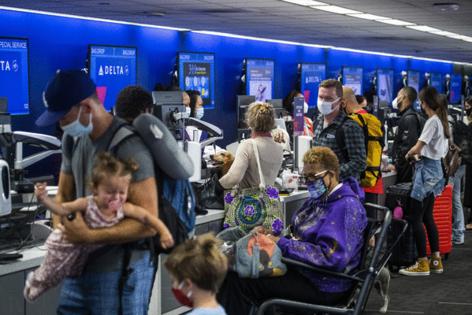 Only about 60% of Transportation Security Administration employees are at least partially vaccinated with about a month to go before the Nov. 22 deadline for federal employees to be fully vaccinated. Federal employees who ignore the mandate face discipline, including being fired, according to the U.S. Office of Personnel Management.

TSA Administrator David Pekoske told CNN last week that he is "very hopeful" the agency won't have a worker shortage but said the TSA is preparing contingency plans in case it can't be avoided.

The agency expects more TSA employees to be vaccinated in the coming weeks, with the hope that "the vast majority of TSA agents will be vaccinated," a spokesperson said. The agency was unable to say how the vaccination rate for screeners compared with that of employees overall.

"At TSA, we are hosting employee town halls, sending broadcast emails, and posting details on the requirement in break rooms on how and where to upload documents for proof of vaccination status," TSA spokesperson Lisa Farbstein said.

The risk that the TSA may be forced to fire a large segment of its workforce ahead of the holiday weekend prompted Senate Majority Leader Charles E. Schumer to urge the TSA to develop a contingency plan and increase vaccination rates before Nov. 22. He urged the agency to make greater use of explosive-sniffing dogs to help move the screening lines faster.

"Late last week the TSA hinted at a potential real travel mess as Thanksgiving approaches," he said during a news conference Sunday. "And that's because they reported that 40% of their workforce remain unvaccinated from COVID-19."

Airlines for America, the trade group that represents most of the country's airlines, declined to speculate on what effect the vaccine mandate could have on Thanksgiving travel plans, except to say in a statement, "we remain in routine communication with our federal partners to prioritize a safe, seamless travel experience."

Other government agencies and private businesses are reporting much higher compliance with vaccine mandates.

After a year of intense growth, Target Corp.'s grocery-delivery business, Shipt, is starting to level off and its pool of competitors keeps expanding.

More shoppers embraced the convenience — and safety, from a health ...Read More

Theranos founder Elizabeth Holmes on Monday testified tearfully that former company president Sunny Balwani, her romantic partner for more than a decade, forced sex on her when she displeased him.

“He would get very ...Read More

WASHINGTON — Commerce Secretary Gina Raimondo says it's time to get "serious" about reviving semiconductor chip production in the United States as the global auto industry pivots to electric vehicles.