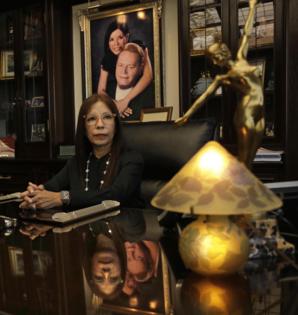 Her late husband, Larry Flynt — founder of Hustler magazine and a broader adult-themed entertainment group — liked to proclaim himself a "smut peddler" and a "pornographer who cares." Since she took the helm of his empire after his death eight months ago, she says she has taken on all the monikers that defined his rise in the industry, and she vows to continue his rebellious legacy.

"If they are going to give me that label, I'll wear it," she said in an interview at Flynt Management Group's ornate Beverly Hills headquarters.

Flynt has taken the reins at a precarious time. The way adult entertainment is produced and consumed is fast changing. The company's two operating card clubs are struggling to rebound from a months-long pandemic shutdown. The print magazines — Hustler, Taboo and Barely Legal — are within a couple of years of closing because of declining revenue.

Hustler and other old-school industry leaders are now forced to compete with websites such as OnlyFans, which distributes adult content created by users who make money through subscriptions or tips.

Hustler doesn't offer entertainment created by users, Flynt said, because verifying the age of the performers is difficult and Hustler wants to provide only "high-quality content." Instead, she said she plans to grow audience by expanding the reach of its videos and movies through Hustler TV on more than 500 cable and satellite providers around the world.

"It's all about numbers and revenue," she said.

Larry Flynt's ostentatious office — adorned with Tiffany lamps, Roman columns, velvet-covered furniture and French paintings — remains empty, a shrine to the company's founder. Flynt works out of an adjoining office where she said she tries to channel her late husband when she is called to make tough business decisions.

"I'm here to maintain his art and his legacy," she said.