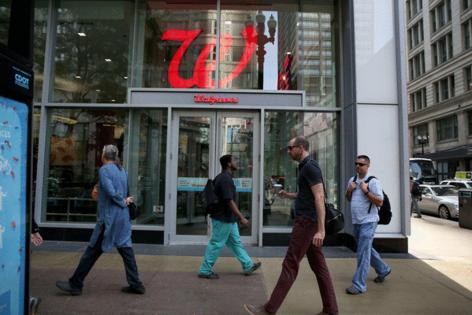 Walgreens Boots Alliance plans to invest $5.2 billion in VillageMD, which provides primary care to patients, and increase the number of Village Medical clinics in its stores to 1,000 by 2027, with half of those in medically underserved communities.

The investment will give Walgreens a majority ownership stake — 63% — in VillageMD. Walgreens previously owned 30% of VillageMD, the company said Thursday.

The move is the latest by Walgreens to form partnerships with other companies that get more customers into its stores and help it expand further into health care, even as the retail pharmacy chain continues to cut costs. Walgreens also announced plans Thursday to try to cut $3.3 billion in costs by 2024, up from an earlier goal of $2 billion a year by 2022, which the company has already reached.

The deal is expected to close by the end of the year, pending the conclusion of a waiting period required under antitrust law.

Many of Walgreens’ partnerships, including with VillageMD, are aimed at getting ahead of rapid changes in health care as it works to compete with the likes of CVS Health and Amazon. VillageMD will be part of a new health care-focused business segment at the company, said CEO Roz Brewer, during a call with investors Thursday.

“The pandemic further affirmed the timing is right for this new phase of our company,” Brewer said. “Consumers are embracing retail pharmacies to manage their health more than ever.”

The investment in VillageMD, as well as others, will help Walgreens capture more share of the health and wellbeing market and also help customers better manage chronic conditions, said John Standley, Walgreens president.

Walgreens also announced Thursday a majority investment in CareCentrix, a Connecticut-based company that coordinates home care for patients, including after they go home from the hospital.

In September, Walgreens said it would invest $970 million in Massachusetts-based Shields Health Solutions, which is a company that helps hospitals and health systems with specialty pharmacy services. The investment will give Walgreens a 71% ownership stake in Shields.

Earlier, Walgreens partnered with LabCorp to collect samples in stores from consumers for lab testing.

Walgreens has been doing well financially in recent months, as it also works to cut costs. On Thursday, Walgreens reported a strong fourth quarter, topping expectations. For fiscal year 2021, net cash provided by operating activities was $5.6 billion, up $70 million compared with the previous year.

Walgreens has been seeing more foot traffic in stores after many customers disappeared during the early months of COVID-19. Walgreens has had many people in its stores seeking COVID-19 vaccines, and gave 34.6 million COVID-19 vaccinations in fiscal year 2021.

Before COVID-19, Walgreens implemented a number of cost-saving measures, as it worked to adapt to changing consumer habits and deal with pressures related to reimbursements for medications.

Walgreens said Thursday it had cut more than $2 billion in annual costs in fiscal 2021, a year ahead of schedule. Walgreens laid off more than 100 employees in its Deerfield office in October 2019, and has closed more than 200 U.S. stores in recent years.