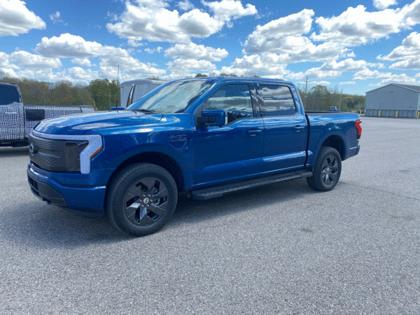 DETROIT — A year after revealing plans to invest hundreds of millions of dollars in the iconic Rouge Complex to build the all-electric F-150 Lightning, the automaker announced Thursday that its initial plan didn't go far enough.

Ford confirmed it will double production of the highly-anticipated 2022 Ford F-150 that will be built with a battery pack instead of a gas tank.

With 150,000 reservations for 2022 F-150 Lightning received online by mid-September, the company confirmed it will be adding another $250 million investment at the Rouge Electric Vehicle Center and create 450 additional hourly direct jobs, with most of the workers building the Lightning.

In addition, workers at Rawsonville Components Plant in Ypsilanti will assemble the batteries and Van Dyke Electric Powertrain Center in Sterling Heights will increase its capacity to supply electric motors and electric transaxles for the F-150 Lightning.

This is on top of the initial $700 million investment Ford announced in 2020 as part of a plan to add 300 jobs at the Rouge Electric Vehicle Center to support battery assembly and production of the F-150 PowerBoost hybrid and fully electric F-150.

The investment in added jobs will help increase production capacity to 80,000 trucks a year, Ford told the Free Press.

Ford has been able to track early interest and convert that to sales with its pivot to requiring online refundable reservation orders as part of a new protocol for carmakers. Ford did the same with its all-electric Mustang Mach-E.

Getting an early peek

Ford also planned to give public officials, including Gov. Gretchen Whitmer, a glimpse of its all-new pickup truck prototypes coming out of the Rouge Electric Vehicle Center on Thursday.

These trucks will leave the factory for real-world testing so that they may be ready to arrive in customer driveways by springtime, as scheduled.

Meanwhile, the F-Series continues to be America's top-selling franchise.

The 2021 F-150 Hybrid has made headlines throughout the year for its ability to work as a portable generator and rescue families without electricity, whether during a winter storm or a wedding.

"... The Rouge has always been the center of innovation," he said.

The automaker, which is the largest employer of hourly automotive factory workers in the U.S., has invested $7.7 billion in Michigan and created and retained 7,000 Michigan jobs since 2016, the company noted.

"Michigan has been the home of Ford since its founding in 1903 and these sites represent a growing network across southeast Michigan that will support the next generation of Ford's battery electric, connected and autonomous vehicles," Ford said in its news release.

The potential impact of Ford moving its customers from the traditional internal combustion engine, commonly referred to as "ICE," has a potentially profound impact on the pickup truck industry because of its huge sales volume.

"Today's announcement is a great example of the right way to navigate the transition to tomorrow's vehicles by ensuring good-paying jobs of the future. Investing in building vehicles right here, in the United States, with the hard working men and women of the UAW. Investments like this can pave the way to a future that protects our families, our communities and our middle class," Laura Dickerson, director of UAW Region 1A, told the Free Press.

"And Ford is doing this the right way with the F-150 Lightning — creating 450 additional UAW jobs. Ford is investing in this EV Lightning as well as hybrid and gas F-150 versions as consumer demands shift. It's not a one size fits all approach," she said.

President Joe Biden spent time in the plant in May, meeting chief engineer Linda Zhang and members of the Lightning team.

Separated by 10 feet and a see-through anti-COVID barrier, Elizabeth Holmes faced off against federal prosecutor Robert Leach for six hours Tuesday, as Leach sought to highlight her alleged lies about the failed blood ...Read More

Minnesota's largest company by revenue expects to keep getting bigger next year.

UnitedHealth Group detailed for investors Tuesday how the Minnetonka-based health care giant expects in 2022 to grow revenue by about 10-11%...Read More

A portion of the $1.36 billion that LG Energy Solution's Michigan office has secured for investment to increase its capacity for producing electric-vehicle batteries in North America will help to expand its plant in ...Read More

While much of the world was sent into a panic by the sudden emergence of the Omicron variant of the COVID virus, Moderna Inc. weathered the shock pretty well.

Indeed, its shares have gained more than 25% in value since ...Read More

The board first ...Read More