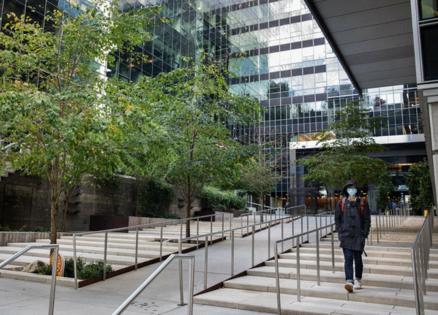 SEATTLE —Amazon has softened its stance on remote work, announcing in an internal memo Thursday that tech and corporate employees can continue working from home two days a week once COVID-19 restrictions are lifted.

Most of Amazon’s 60,000 Seattle-area corporate employees will also be allowed to work remotely from a domestic location for four full weeks each year, according to a copy of the memo seen by The Seattle Times, which was later posted on Amazon’s blog.

“Our thinking is predicated on what we believe will be most beneficial for customers, while also trying to give employees more flexibility in their work environment and lives,” the memo said. Many Amazon employees will start heading back to offices as soon as local jurisdictions fully reopen — July 1 in Washington state — with the majority of workers in offices by the beginning of September, the company has said previously.

The announcement, Amazon’s first big update to its return-to-work policy since saying in March that it envisioned a return to “an office-centric culture” by autumn, was greeted favorably by employees. The move, while not expected to greatly affect the market for office space, may cause continued price escalation in out-of-town homes and apartments, and could throw a wrench in downtown Seattle’s post-pandemic reopening.

The new policy further underscores the differential treatment of Amazon’s corporate employees compared to its hundreds of thousands of U.S. warehouse workers, none of whom will be able to work remotely and who sustain injuries at rates above the industry average.

Amazon’s new policy for corporate employees follows backlash from some Amazonians to what they interpreted as the expectation that they would have to return to the office full time once states reopen from coronavirus restrictions.

Some tech companies launched recruiting campaigns that seemed targeted in part at those Amazon workers’ dismay over an end to remote work.

While some Amazon employees predicted that the company’s prior stance on returning to the office could cause defections, many reacted positively to the news Thursday.

“My family is fully vaccinated. I’m not very worried about coming into the office, but I hate open floor plans and I like working from home,” said one Amazon software engineer. He lives in downtown Seattle and can get to work easily, he said, but prefers his home office — acknowledging that he’s “super privileged even having something close to this choice.” The engineer requested anonymity because he was unauthorized to speak with the media.

Amazon says its productivity targets for warehouse workers will remain unchanged despite a determination last month from Washington state's workplace safety regulator that the pressure Amazon places on workers to meet ...Read More

3M said Thursday that U.S. marshals have seized more than 1 million counterfeit versions of its N95 respirators from a warehouse in Lexington, Ky.

It's the latest of a long line of fake N95 confiscations since the COVID-...Read More

Doctors and hospitals strenuously objected to the plan, with emergency ...Read More