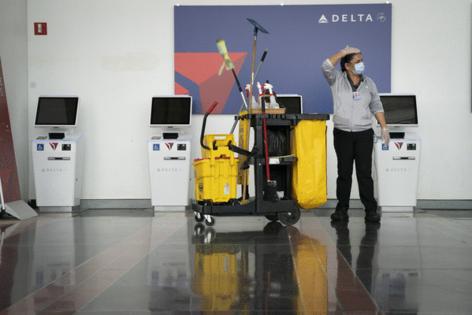 Delta Air Lines is asking employees at its Atlanta headquarters to help clean and staff airport lounges because of a worker shortage.

The airline told employees that its Sky Clubs in Atlanta, which have all reopened, are "severely understaffed," by 115 people, due to a contractor shortfall. The airline plans to reopen all of its clubs across the country by summer and is seeing a rapid increase in passengers as more Americans are vaccinated.

In a memo, Delta asks employees in Atlanta to volunteer for a few hours to help with cleaning, wiping tables, running food and restocking food buffets.

It's not the first time Delta has asked office workers to volunteer to help with airport work.

For years, the company has used Peach Corps, a group of its employees who volunteer to work during holiday seasons and other busy travel periods, directing passengers, answering questions, helping at security checkpoints and with wheelchair assistance. During the pandemic, those volunteers also helped to clean and sanitize ticket counters and kiosks.

Delta CEO Ed Bastian said during a CNN interview last week that his biggest concern was having enough workers "not just of our company — because we have our employees there — but the service contractors."

While CARES Act funding for airlines came with stipulations that restricted carriers from laying off employees, that prohibition didn't prevent thousands of layoffs and furloughs by aviation contractors, which make up a large part of the workforce at the airport.

"We have been down for about a year now. As you start to turn this big machine on, it takes some time," Bastian said. "It's going to be a little creaky for a while, to go from load factors of 40 to 50% to 80 to 90% almost overnight."

Companies that operate Sky Clubs, restaurants and shops on the concourses also face some additional staffing challenges. Employees who work in areas of the airport beyond security checkpoints must go through extensive federal background checks. That means the hiring process and security clearance process can take longer, and it is often difficult for employers to find enough workers who can pass the vetting process.

In the early days of the pandemic, Delta ended a contract with SodexoMAGIC to provide staffing at nine Hartsfield-Jackson International airport Sky Clubs.

The company closed its operation at the airport, eliminating 161 food service workers and 85 janitorial workers. The Sodexo workers were non-union.

The company is hiring full-time janitorial workers, cooks, dishwashers, food service and wait staff and paying from $10.90 to $13 an hour.

Sodexo's website also touts sign-on and attendance bonuses of up to $2,000, and an employee referral bonus of up to $1,000.

"The service workers in the hospitality sector in the U.S. are straining for workers. But we're doing what we have to do. We're having to pay bonuses to bring people in," Bastian said on CNN.

Bastian also said he thinks the enhanced unemployment benefits offered during the pandemic have had an impact, but that it's "overstated."

Some people have moved and "are not sitting here waiting for a job," Bastian told CNN's Richard Quest. "It's going to take some time. So I think it's unfair to criticize people. There's almost implications that people are lazy — they're taking. I don't believe that at all."