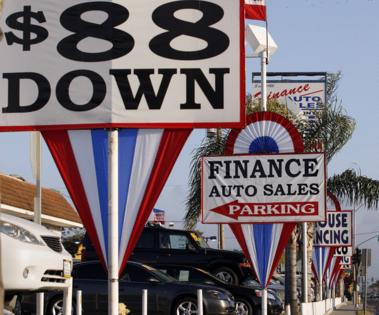 Trying to unload it, the Orange resident took the Ford to a local car dealership, which offered her $4,850 for the sedan in late March. But that was about $1,000 less than the low-end valuation from automotive research company Kelley Blue Book, so she passed.

It was the right decision. On Monday, Iliff sold the vehicle to CarMax in Costa Mesa for $6,400.

"I didn't expect to get that much," said Iliff, 31, director of business operations at BOTEC Analysis, a public policy research and consulting firm. "I am absolutely pleased with the financials."

Iliff benefited from a red-hot used car market, which has been roiled by a once-in-a-generation set of circumstances brought on by the pandemic. Last year's collapse of the rental car market, ongoing production issues in the new automobile business and droves of buyers flush with stimulus checks have turned the used car market upside down, leading to a shortage of inventory that has sent asking prices soaring to historic levels in the Los Angeles area and nationally.

"If you have an extra car to sell it's a great time — there may never be another time greater than this," said Eric Ibara, director of residual values at Kelley Blue Book, a subsidiary of Cox Automotive. "But if you're selling a used car to buy another car, it could be difficult. I've been in the industry 30 years now and I have never seen the market as hot as it is."

At Worthington Ford in Long Beach, there are 137 used cars for sale — only a little more than half of what it would typically have on offer, said Ates Baydu, the dealership's director of e-commerce operations.

"Our inventory is decimated quite a bit right now," he said. "It was really brisk a couple months ago; right now it is turbocharged."

A confluence of events has limited used car inventory.