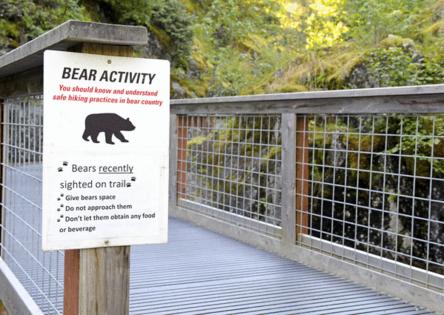 Colorado’s bears seem to be out earlier in parts of the state and a bit bolder in others, wandering trails, city streets and even into homes or restaurants in search of easy food, experts say.

The reasons why vary from region to region. To the southwest, their natural food this time of year — nuts and berries — appear to be in short supply, so they’re on the lookout for quick meals, according to Bryan Peterson, executive director of Bear Smart Durango.

Or to the north, around Steamboat Springs, the bears seem to have lost their natural fear of humans, so they feel empowered to break into homes, garages and even restaurant patios more often than normal, Christy Bubenheim, of Colorado Parks and Wildlife, said.

Whatever the reason, Coloradans should be aware of the animals with whom they share the state and take precautions to keep themselves and the bears safe, the experts agree. Because while bears have attacked — and even killed — people in Colorado before, the vast majority of human-bear encounters actually end poorly for the bears.

“We’ve had to put down two bears in the last couple of weeks,” Bubenheim said. “Once they learn that behavior of going into a house repeatedly, it’s impossible to train it out of them.”

Between 2015 and 2021, Colorado Parks and Wildlife euthanized 775 bears and captured and relocated another 402, according to data provided by department spokesman Jason Clay.

The best way for people to minimize bear encounters, euthanizations and relocations is to keep easy food sources secure and to try and scare the animals away whenever they can, Bubenheim said.

Normally in the Durango area, bear activity ticks upward around mid-August, Peterson said. But the environment is “super dry” right now, meaning a lot of natural bear food isn’t as easy to come by. So the animals are on the move much earlier than normal, looking for whatever they can eat.

They’ll go after unsecured garbage cans, chicken coops or even sneak into homes if they can, he said.

If you are a lightning bug fan who didn’t get tickets to this year’s Pennsylvania Firefly Festival in the Pennsylvania Wilds, you’re in good company.

Unlike the early days, when any and all were welcome to come ...Read More

This spring, an invasive silver carp bolted up the Mississippi River — right to the edge of where a researcher says the state has a chance to block the species from advancing any further.

The fish, tagged by the ...Read More

He had hopscotched north from Sebring between dwindling patches of trees until he came to Celebration.

If Florida was an entire world, ...Read More

BOISE, Idaho — A fungus that causes a fatal illness in bats has been detected in Idaho for the first time, federal and state officials confirmed.