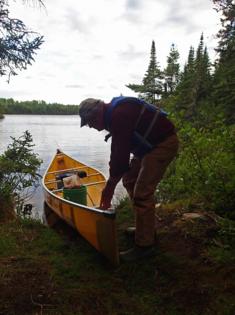 When paddlers of all means glide through the Mississippi River for a weekend of canoe races in early summer, they'll dip into an activity that has coursed through state waters for generations.

Canoe racing doesn't get the ink of other big-time sports like the Minnesota Twins or even related recreational pursuits like Boundary Waters adventures – but in simpler times it generated front-page material for the masses.

Minneapolis' summer Aquatennial celebration, going on 83 years, played a major part. Its Paul Bunyan "canoe derby" of 450 miles from Bemidji to Minneapolis garnered wide acclaim. Its finish, too — when spent paddlers floated into the city — marked the Aquatennial's official start. The marathon made canoe racers like Tom Estes and Eugene Jensen sports stars in their own right.

Their predecessors also drew wild interest according to published accounts. The 1941 Paul Bunyan derby was won by two Chicagoans, Howie Oslund and Bob Robinson, who arrived in close to 66 hours, their final sprint watched by 100,000 people lining the banks of the river from Washington to Franklin avenues.

The canoe race ended in the early 1960s, but racing? Far from it. It's a heritage activity with a loyal base — like fishing or hunting or Nordic skiing — that helps define life in the state's outdoors. The front-page headlines have faded from memory, but the desire to hit the water in-state and across North America is unabated.

Longtime friends and paddlers Scott Miller and Todd Foster have a ready-made audience for their new events in June, but they are hoping to attract newcomers, too. Both have channeled their passion for covering long distances in a canoe into the Two Paddles Canoe and Kayak Races, June 10-12, on the Mississippi River.

Two Paddles includes several races, ranging in distances from 140 miles (Brainerd to Coon Rapids) to 7 1/2 miles. The main event, called the MR 140, begins June 10 and includes some night paddling and portaging, in line with other national canoe races — obscure to the general public but revered in canoe racing's tight-knit community. Currently there are 58 registered for the MR 140 from 15 states and Manitoba, Canada, Miller said, and among them a paddleboarder. Running solo, in tandem or in teams, they'll finish at Coon Rapids Dam Regional Park, the ultimate endpoint for all of the Two Paddles events June 12.

The 7 ½-mile event is considered a recreational outing and includes shuttle service. Participants will paddle from Coon Rapids to Minneapolis and get driven back to the regional park and a post-race party.

Miller likes to make headlines. Just last year, he and three others attempted to break the speed record for a paddle of the Mississippi River from start to finish — Lake Itasca to the Gulf of Mexico. (He and a new team will make another attempt in 2023 after 2021's try capsized – literally – within hours of reaching New Orleans.) Miller also is a veteran of prestigious races like the Missouri 340, the longest continuous paddle race in the world and, he says, its "egalitarian" approach that pulls in small river towns in support. That all-comer vibe even in something so grueling inspired the Two Paddles weekend, Miller said, and what it might become.

But Miller also looks back, with a nod to Minnesota's racing glory years like those during the Paul Bunyan.

It’s been said that beer and the outdoors make a natural pairing, so it feels fitting that Colorado Parks and Wildlife decided to partner with alcohol makers statewide on a fundraising effort to celebrate its 125th ...Read More