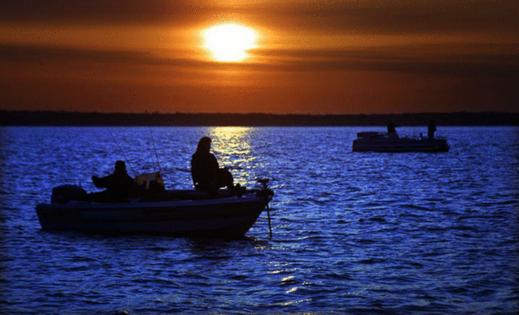 I've owned various garages over the years that held various boats, but none of these structures was more hallowed than the first, a poor lighted edifice that featured the usual vestiges of workshop disarray: A broom in one corner, shovels and rakes scattered helter-skelter in another, a bench full of unreturned tools borrowed from friends, and a bad painting of a mallard duck hanging crooked over one door.

Also, in addition to a vintage aluminum fishing boat on a trailer, the garage housed a Shell Lake hunting skiff, an unrestored craft built circa 1950 whose presence reminded me daily that the thrill of impulse buying often vanishes with the cash spent.

I raise the issue of boat-holding garages now, in April, because — bear with me — the current rage among people for whom the day's news upsets their psychic equilibrium is to create meditation rooms in which pleasant states of mind, and even spiritual awakenings, can be achieved. Decorators in the know suggest these rooms be outfitted with "bells, chimes, crystals and affirmation stones" and perhaps even "spearmint eucalyptus meditation candles." When combined with the recommended dozen-or-so buff-color pillows scattered on the floor, these knickknacks are guaranteed to help achieve the desired serenity. Or not.

Either way, sitting in a boat on its trailer in a garage in April, when ice still covers many Minnesota lakes, has long provided a similar state of elation for me. And not only for me, but for hundreds of thousands and perhaps even millions of boat owners — an assertion, I'll concede, that is unverifiable, but for present purposes we'll let slide.

What is verifiable is that the anticipation of future, positive events can induce its own type of euphoria, so much so, researchers say, that the process of anticipating a coming event is often recalled more fondly, and clearly, than the event itself.

In this case, the anticipation by boat owners of coming open water and the imagined splashing into it of their boats, whether large or small, is an act, especially after a long dark winter, that provides its own sort-of delirium, candles optional.

This attraction to water and of floating a boat on it is common to all people, or nearly so, especially those for whom the opportunity is seasonally restricted, as is the case in Minnesota.

When I was a kid in the Upper Peninsula of Michigan, we had a cartop Crestliner that my dad flipped over onto sawhorses for the winter. This was outside, in the backyard, and our kitchen window provided a bird's-eye view of the craft and the snow that accumulated on it, December through March.

By April, my dad had stared at the boat for so many months that he began doing so even during the mealtime prayer, vacillating, perhaps, between thanking the Lord for our daily bread and beseeching Him, finally and once and for all, to free us from the bondage of winter.

Early on, I was smitten with my dad's love of boats and water, and when summer came I'd ride my bike to our town's small harbor on a bay of Lake Michigan. One local fellow owned a Chris-Craft, maybe a 35-footer, a snazzy cruiser with a mahogany transom that he polished daily with soft cloths and elbow grease. Swinging my legs over the dock edge, I'd listen wide-eyed while he regaled me with stories of voyages he had made to Mackinac Island and Petoskey and Harbor Springs and Detroit, places I could otherwise only imagine visiting by moonshot.

Thousands of invasive carp swim the channel of Ramsey County's Rice Creek and its connected lakes, rooting along the bottom and setting off a cascade of damaging effects that harm native fish, birds and plants.

Once a rare sight among Minnesota hunters, women are increasingly commonplace in the state's woods and fields during fall grouse, pheasant, waterfowl and deer seasons.

Their greater participation in the field sports is ...Read More