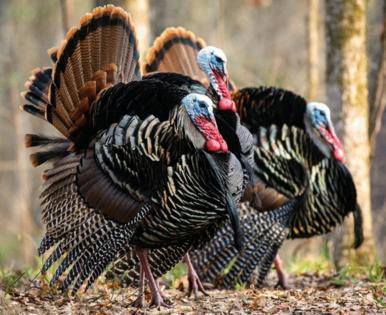 Despite the arrival of avian influenza in Pennsylvania, there is no evidence the state's wild turkeys are infected a week before the one-day junior and mentored youth gobbler hunt April 23, and two weeks prior to the monthlong season that begins April 30.

Since the discovery weeks ago of a bald eagle found dead in Chester County from highly pathogenic avian influenza, HPAI has been confirmed in other birds in Pennsylvania's south-central and northwestern counties. It can infect domestic and wild birds, including Eastern wild turkeys.

Known to have jumped to humans years ago in Asia, HPAI is currently "an animal health issue" that poses minimal risk to humans and health of the general public, the Centers for Disease Control and Prevention said. People who handle infected birds without gloves and masks are at a higher risk, including spring gobbler hunters, but no human cases related to this avian influenza virus have been detected or reported in the United States.

That comes as good news to some 150,000 hunters expected to try to call in the big birds in Pennsylvania this spring.

Game Commission turkey biologist Mary Jo Casalena said the statewide flock is bigger than in recent years. Arrival and survival of poults was unusually high in 2021 due to a warm, dry spring and, in places, the timely emergence of one of the largest cicada broods. Casalena said surveys revealed an average of 3.1 poults per hen, the highest ratio since monitoring began.

"We have not detected HPAI in wild turkeys to date," she said. "We did not test for it during winter turkey trapping because it had not been detected in Pennsylvania then. Trapping had already been completed when we had our first case."

But as the season approaches, Casalena said the Game Commission is watching closely.

"We do collect any unhealthy-looking turkey that is called in — or any of our study turkeys with transmitters that are killed — and test for HPAI," she said. "If it is positive the carcass [would be] disposed of according to our protocol. Of the few tested, we conducted a full necropsy to determine cause of illness or death."

Thousands of invasive carp swim the channel of Ramsey County's Rice Creek and its connected lakes, rooting along the bottom and setting off a cascade of damaging effects that harm native fish, birds and plants.

Once a rare sight among Minnesota hunters, women are increasingly commonplace in the state's woods and fields during fall grouse, pheasant, waterfowl and deer seasons.

Their greater participation in the field sports is ...Read More

An Idaho father and son will serve jail time, pay thousands in fines and be banned from hunting for years after pleading guilty to poaching a female grizzly bear near Yellowstone National Park last year.