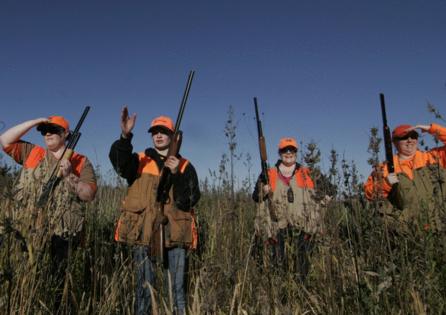 The dog stood still with intensity, nose to the ground, as two of us circled close behind. The grass fluttered, Jax pounced and a rabbit squirted away.

Fun, right? This year's opening day of pheasant hunting 30 miles southwest of Mankato provided an abundance of laughs. With four of us and Jax pacing through the pale grass in bright sunshine, we saw at least nine roosters take flight along with just as many hens. Our harvest of five ringnecks by noon gave us a new appreciation for Madelia's self-proclaimed but partly whimsical nickname of "Pheasant Capital of Minnesota.''

Hunting in the same area last year, we came across more hunters and fewer birds than we did on Saturday. The opportunities here are on a patchwork of public or publicly accessible lands tightly surrounded by a sea of crop fields and scattered and sometime odorous livestock operations.

Our pheasant expectations had been tempered by an official statewide survey that showed a possible population decline this season. But as we waited for shooting hours to open at 9 a.m., our hopes were lifted by the sight of a lone rooster gliding effortlessly into the field we were about to hunt, from across the road.

Soon we were walking and Jax was scampering neatly in front of our line that consisted of Mike, from Woodbury; his friend Nikko Mikacevich of Eagan; and Mike's dad, Scott Ward of Inver Grove Heights, a lifelong friend.

The rabbit incident happened more than an hour into our hunt. Before we could finish chuckling about it, five birds — all roosters — flushed into the air from a nearby sun-drenched knoll. We had accidentally intruded on their warm morning nap. Scott was the first to react. He connected just as he did on his two previous chances while the rest of us were left with longer shots that missed.

The parcel we hunted was about 80 acres in size, with lower landscapes covered in cattails and coarse shrubbery. But the tall grass was plentiful and easy to maneuver. We walked certain swaths more than once, and with results.

Near the end of our morning hunt, we passed through the same field twice. The second time, Jax locked up a scent that came from the weedy base of a rock outcropping. Mike called me closer, in time to shoot squarely at the rooster's hind end as it lifted away. The big bird folded and crashed near the field's edge. But despite finding a clutch of bloody feathers in the short grass, we couldn't locate it after a long search.

Clearly there is pheasant habitat in Minnesota as good or better than what's available around Madelia in the northeast corner or Watonwan County. Before the trip, Dan Madsen, the former city administrator in Madelia, said the city trademarked the nickname partly in jest. There's still a billboard on the edge of town, viewable from Hwy. 60, that proudly displays a long-tailed rooster flying above the motto.

If you're tramping a Minnesota wildlife management area (WMA) Saturday looking for pheasants on the season's first day, or following your dog on another piece of public ground or perhaps on private property, you might or ...Read More