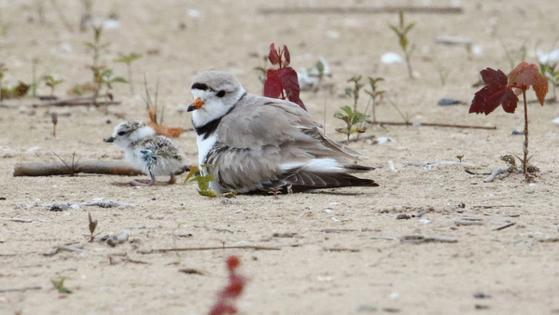 ERIE, Penn. — Jutting into Lake Erie since the end of the last ice age, the Presque Isle peninsula is an important resting and nesting place for migratory birds. More than 339 species have been identified on the 3,200-acre spit of sand, trees and marshes in Presque Isle State Park, Erie County.

On Gull Point, the peninsula's most northern beach, one species is slowly reestablishing its nesting grounds after a 66-year absence. Conditions have improved substantially for the sparrow-size piping plover despite a season of courtship drama.

Plovers are common shorebirds, and there are several dozen species. With a black band across its forehead, a black upper chest line, short orange-red legs and brown and white sand-colored feathers, the piping plover scurries across saltwater beaches and sandy Great Lakes shorelines. Their melodious peep-peep is a warning as they chase each other across the sand in constant kerfuffles for food. They eat large bugs and whatever they can catch.

For centuries two piping plover subspecies nested separately, one on the Atlantic Coast and Midwest, and another on Great Lakes shorelines. Human development and overuse of their nesting beaches gradually forced breeding piping plovers off Presque Isle, and fewer returned from wintering grounds in Bermuda and Caribbean coastlines. The U.S. Fish and Wildlife Service estimates there are 7,500 to 8,500 combined subspecies of piping plovers. Those that travel the Atlantic and Midwest flyways are federally listed as threatened. The Great Lakes population is considered endangered by the United States and Pennsylvania.

"They're an umbrella species for an ecosystem. When there are piping plovers, it means there's a healthy beach system; when they're not there, we know something is off," said Cathy Haffner, a Pennsylvania Game Commission biologist who has worked on piping plover recovery since 2001.

A single piping plover was spotted on Gull Point in 2005, and extensive efforts began in hopes of restoring the beach and attracting more of the birds. When motorized vehicles were barred from Presque Isle beaches, vegetation overgrew areas where the plovers had scraped shallow nests in the sand. Ms. Haffner and others from the state Game Commission, Department of Conservation and Natural Resources, U.S. Fish and Wildlife Service and U.S. Army Corps of Engineers landscaped the beach, removed invasive weeds and planted natural vegetation.

Plovers are picky. They seek out beaches with wide shorelines of sand and cobble, and a wide distinct tree line.

"Gull Point has an extensive tree line that goes far back with places for chicks to hide," she said. "This is great habitat for plovers. From the lighthouse to Gull Point, it's designated critical habitat by the federal government."

Humans are banned from about 1 mile of Gull Point from April through October, and boats cannot moor within 100 feet of the beach. Ms. Haffner said the birds like the privacy.

Similar to their relative, the killdeer, adult piping plovers are sticklers for the intricacies of mating ritual. Males arrive first following the long northern migration in the spring. When females are on the beach, males engage in performance flights and behaviors that include circling, calling, scraping the sand with the back of their legs and chasing females around the beach. Females choose a mate by picking one of his scrapes for a nest. She accessorizes by placing small stones, shells and vegetation in the nest bowl. The pair stay together throughout the nesting season, and the male typically watches for predators.

"Nesting is fun to watch," said Ms. Haffner. "When eggs are on the ground, the male and female share incubation duties. The tiny chicks are like two cotton balls with legs, and they start pecking on the ground right away and running everywhere."

After the eggs hatch in June and July, the female begins her southern migration. The chicks fledge in 21 to 28 days, and the male parent leaves. Migration is instinctual, and the previous year's chicks return in the spring capable of breeding.

Piping plovers have nested at Gull Point for five consecutive years, but after more than a half-century of absence, dysfunctional courtship behavior threatened their permanent return.

In 2017, a male piping plover pioneered the Gull Point site, where its ancestors had nested decades earlier. Nesting continued with successful fledges for five consecutive years.

This year, however, was anything but routine. Four nests were constructed. Three failed to produce eggs. The male that had established the first Pennsylvania colony in 2017 seemed to develop a wandering eye. In spring and summer he courted three females at overlapping intervals. Call it a midlife crisis, but his finagling swinger lifestyle put all of the nests in jeopardy.

Ms. Haffner said when a male splits his time among multiple nests, none of the nests are adequately protected from predation. Ultimately, just two piping plover chicks took flight in August from the shores of Presque Isle State Park. It is unknown whether the drama will continue in 2022.

If you're tramping a Minnesota wildlife management area (WMA) Saturday looking for pheasants on the season's first day, or following your dog on another piece of public ground or perhaps on private property, you might or ...Read More

Minnesota Natural Resources Commissioner Sarah Strommen has stepped up her campaign to protect wild deer against the spread of chronic wasting disease (CWD) by once again halting the movement of captive deer among deer ...Read More

Record heat. Extensive drought. "Unprecedented" wildfire conditions. By all accounts, this wildfire season could have been a disastrous one for Idaho.