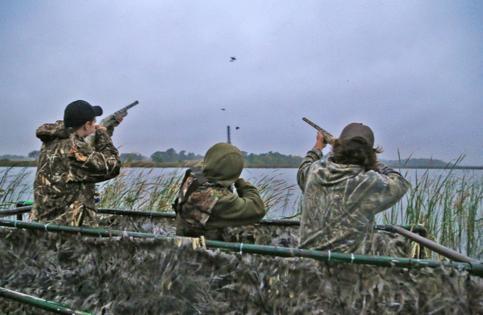 The season is allowed for three years under an experimental designation by the U.S. Fish and Wildlife Service. It can be continued after that time, at the state's discretion, provided most observed hunters shoot at teal only and not at mallards or other ducks.

Minnesota had expected the Fish and Wildlife Service to allow a second early teal season in 1966. But that option was turned down after a significant drop in Minnesota's teal-breeding population was recorded in spring 1966.

Any effects of the current early season on Minnesota's breeding teal won't be known until next spring, provided breeding-duck surveys are undertaken at that time. Even then, questions might arise because the same surveys were cancelled this spring and in 2020 due to the pandemic.

Here are hunters' reports of their harvests and teal sightings Saturday morning:

— Steve Cordts, about 50 miles west of Bemidji: Cordts is the Department of Natural Resources waterfowl specialist charged with organizing the early teal-hunting season. He served Saturday as a "spy'' watching hunters to determine whether they shot before legal time (sunrise) and/or whether they shot at or killed ducks other than teal. In all, about 30 state and federal wildlife officials will be in "spy blinds'' throughout the five-day hunt, as required by the Fish and Wildlife Service to determine whether the hunts can continue in Minnesota. The first two locations Cordts scouted earlier in the week that held teal weren't hunted Saturday. At a third spot, he found a father and son, and Cordts observed the father legally shooting his limit of six blue-winged teal.At a fourth spot, Cordts found a pontoon boat with three hunters anchored about 30 yards from shore, with no vegetation near it, making the boat's position illegal. "Neither the boat nor the hunters were camouflaged,'' Cordts said. "They had four goose decoys and six duck decoys surrounding the boat. Their only opportunity to shoot was at a couple of non-teal ducks, but they didn't.'' Cordts saw relatively few hunters Saturday morning, but lots of teal.

— Scott Oberloh, hunting on Heron Lake in southwest Minnesota: Oberloh, of Worthington, and his son, Jacob, have had good duck hunting in recent years on Heron. He and Jacob actually prefer hunting teal rather than mallards, and in recent years, on the regular duck opener later in September, they've taken their limits in a matter of minutes. Saturday was little different: They had their 12 teal (10 bluewings and two greenwings) in about a half-hour. "Where we hunt there is usually a fair number of people on the opener, and on Saturday there perhaps were a few less hunters than usual,'' Scott said. "It seemed also there were fair numbers of mallards around, and the wood ducks flew early.''

— Fred Froehlich, near St. James in southern Minnesota: Fog blanketed this part of southern Minnesota for the first two hours after sunrise. Ducks during this time were present but largely unseen by Froehlich's party of five hunters. "It's a goose hunting area, but we don't know where the geese were, we didn't get any,'' Froehlich said. But his group did collect 18 teal. "We saw a couple of wood ducks and a few mallards, but not many,'' he said.

— Bill Marchel, Mississippi River north of Brainerd: Marchel and his hunting partner, Rolf Moen, saw about 10 groups of hunters Saturday morning on this part of the Mississippi, approximately half the number seen on the regular opener. The area isn't known for rearing teal, and few bluewings were spotted. "Maybe 10 or 15 total,'' Marchel said. "We didn't fire a shot and we didn't see anyone else shoot.'' Wild rice in the river was abundant and ripe, Marchel said.

— Bruce Bjornberg, near Willmar: Hunting with his 10-year-old grandson, Gusto, Bjornberg scouted his hunting lake earlier in the week and had spotted teal. "I'm 76 years old but I still get pumped seeing ducks,'' he said. Gusto was excited, too, when at about 7:10 Saturday morning a flock of about 45 bluewings swung over his grandfather's decoys. The birds soon turned for another look and Grandpa shouldered his 20 gauge, dropping two, which ended up being the hunters' tally for the outing. A few wood ducks also were spotted, the elder Bjornberg said, but no other ducks.

— Wyatt Apel, on the Mississippi River near Kellogg, Minn: Accompanied by his son, Beau, as well as his brother, Travis, and Travis' son, Max, Wyatt set up near where his group usually hunts on the regular opener. The temperature at sunup was 60, with little wind beneath overcast skies. "We didn't see hardly anything,'' Wyatt said. "Not many teal and only a few other ducks. A few geese but not many.'' The group shot one bluewing and missed another.

— Brian Hoffman, Swan Lake: A couple of weeks back, some large flocks of teal moved through Swan Lake, Hoffman, of Mankato, said, but those bigger gatherings were largely absent Saturday morning. Still, enough birds were around for his party of seven to bag 10 teal (one greenwing, nine bluewings) and one Canada goose. At about 9,000 shallow-water acres, Swan is among Minnesota's most storied waterfowl-hunting destinations, and its many duck-hunting shacks are testament to its place in the state's sporting lore.

— Dan Soehren, Swan Lake: With his son, Gabe, Soehren, of St. George, saw quite a few teal in the couple hours after sunrise, but weren't positioned correctly for good shooting. At 8:15 a.m. they had bagged only one bird. Repositioning their decoys and blind, they saw better action and ended up with seven bluewings. "Being careful to shoot only at teal cost us some shots because we wanted to be sure of our identifications,'' Dan said. "There seemed to be a lot of wood ducks around and a lot of mallards.'' The Soehrens heard only a couple of pre-sunrise shots.

— Ed Zlonis, Big Stone County: A DNR waterfowl researcher who works with Cordts in Bemidji, Zlonis was among the 30 or so state and federal wildlife officials assigned to spy on hunters during the experimental five-day teal season. "I observed one group of five for their entire hunt,'' Zlonis said. "They started at legal shooting time and had their limit of 30 birds by 9. The hunt happened fast.'' Zlonis watched through 12-power binoculars. The group had "quite a few'' dogs, he said. He counted about 50 shots fired, with perhaps only one at a non-target duck. "They were good hunters,'' Zlonis said, adding he spotted "plenty'' of teal in the area, with one pond holding about 1,000.

The state Game Commission wants your turkey count. Pennsylvanians who participated in a public survey on wild turkey sightings in July and August are encouraged to report their sightings by Monday.

Lake Worth is officially at "infested" status.

The nearly 3,500-acre lake has been classified as infested with invasive zebra mussels, according to the Texas Parks and Wildlife Department. Zebra mussels were first found ...Read More

A conservation milestone has been reached: Lake trout are reproducing in Lake Erie, where the native fish were considered extinct.

In May, biologists from the New York Department of Environmental Conservation found baby ...Read More