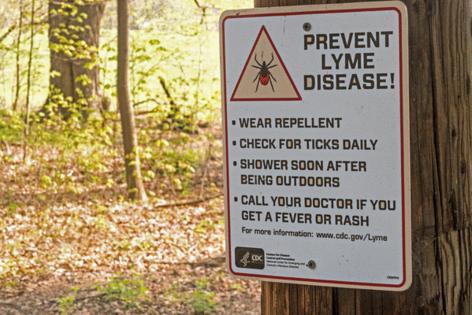 Millions of people who discovered the outdoors at the height of the COVID-19 pandemic have returned to parks, state forests and waterways. What they don’t know about ticks and other bugs could make them dangerously ill.

A spike in the state’s tick population is coinciding with unprecedented participation in hiking, camping, fishing and other outdoor activities. In Harrisburg on Tuesday, the chiefs of three Pennsylvania agencies said a surge in tick-borne diseases has spread across the state.

Patrick McDonnell, secretary of the state Department of Environmental Protection, said the agency has collected twice the number of blacklegged tick nymphs compared to last year. And Dr. Denise Johnson, Pennsylvania’s acting physician general, cited a correlation in the blacklegged tick population and reported cases of diseases carried by ticks.

“This year in particular, we are seeing increases in the number of Lyme disease reports across the state, and clinicians are reporting that they are seeing more cases of other tick-borne diseases, such as anaplasmosis,” Dr. Johnson said in a statement.

Although commonly called deer ticks, blacklegged ticks are more often carried by mice. Symptoms of Lyme disease, the most common vector-borne disease in the United States, include fever, headache, fatigue and a characteristic target-shaped skin rash, according to the Centers for Disease Control and Prevention. Untreated, Lyme disease can spread to joints, the heart and the nervous system.

In recent years, Pennsylvania has led the nation in the number of reported Lyme disease cases. In 2019, the Allegheny County Health Department processed 2,306 reports of Lyme disease, an 11% decrease from the previous year. More recent figures were not immediately available.

Anaplasmosis results in fever, headache, chills and muscle aches. Powassan virus disease is a less common illness spread by ticks. Initial symptoms can include fever, headache, vomiting and weakness; severe cases can result in encephalitis, an infection of the brain, or meningitis, which impacts the membranes around the brain and spinal cord. Most cases occur in the Northeast and Great Lakes regions. The CDC notes that there are no vaccines to prevent Powassan virus disease and no medicines to treat it.

In general, ticks thrive in tall grass, brush and wooded areas. Blacklegged ticks can survive in any habitat and have been confirmed in all of Pennsylvania’s 67 counties.

Cindy Adams Dunn, Department of Conservation and Natural Resources secretary, cautioned outdoors users that the ticks can be found in all 121 state parks, along hiking trails in more than 2.2 million acres of state forestland, and as close as your own backyard.

“It is always important to take preventative measures so you can enjoy the mental and physical health benefits of being outdoors, especially with regard to ticks,” she said. “As tick-borne diseases are becoming more prevalent in Pennsylvania, it is critical to be aware of the risks and be prepared when spending time outdoors year-round.”

Ms. Dunn said prevention can be as easy as covering exposed skin with lightweight and light-colored clothing, and avoiding dense shrubbery and tall grass. Before going outdoors, slip into tick-repellent clothing treated with permethrin, or apply an insect repellent. The Pennsylvania Department of Health recommends a 0.5% permethrin solution or any repellent approved by the U.S. Environmental Protection Agency. Separate studies at the Yale School of Public Health and University of Rhode Island’s Center for Vector-Borne Disease concluded that products containing DEET have been shown to be the most effective at repelling ticks.

For more information on ticks and tick-borne diseases in Pennsylvania, visit the Department of Health website, www.health.pa.gov.

In 2019, the California Air Resources Board commissioned a report from Cal Maritime with a title that would cause the eyes of even the most nerdy bureaucrat to glaze.

The name of the 135-page thicket of tables and ...Read More

IN NORTH-CENTRAL MINNESOTA — Fishing stories often are not only about fishing. Frequently misunderstood as tales of conquest, or attempts at conquest, the best of these yarns instead often regale the vagaries of family ...Read More

Los Angeles Angels superstar Mike Trout proved as good with a fishing rod while in the Twin Cities as he is with a bat, catching outsize northern pike and largemouth bass on his day off July 21, along with teammate Dylan ...Read More

Weber argued that bureaucracies are the most efficient way...Read More