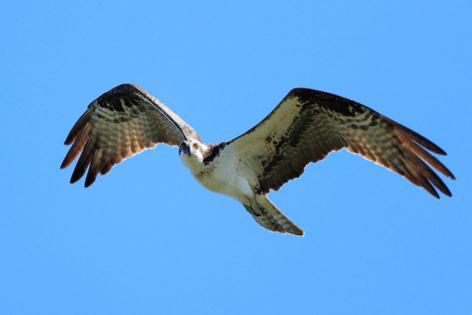 Among the most prominent avian singers this time of year are our migrant visitors, some of whom have traveled thousands of miles, bringing vibrant color and song.

In human terms, it’s the equivalent of a 150-pound person gaining 15 pounds of pure fat per day until tipping the scale at 300 pounds, then shedding 1.8 pounds per hour through vigorous exercise. A long-distance migrant such as a Swainson’s thrush will travel 125 miles a day from as far as the tropical forests of Mexico and Central and South America.

“So profound and hard-wired is the urge to travel in migratory species that even captive birds of their kind will be restless during the migratory season, fluttering their wings even as they stand in place, continuing the behavior for the same length of time it takes free fliers of their species to reach their destination,” wrote Lynda V. Mapes in a 2013 Seattle Times story. “Poignantly, the caged bird will also face its intended direction of travel.”

Whitney Neufeld-Kaiser, a Western Washington birder who teaches classes on how to identify birds by song, introduces some of the birds you’re most likely to hear in the Pacific Northwest this summer.

If the American robin you’re listening to doesn’t quite sound right, it might actually be a black-headed grosbeak. Their song is very similar to that of the robin, but sweeter, more lilting and faster in tempo.

Warblers’ songs are among the most challenging to identify. Wilson’s warblers sing a short, descending staccato series of “chit” notes that often become more emphatic toward the end of the song.

Critics of an Idaho wolf law approved earlier this month have launched a petition that could reinstate Endangered Species Act protections for wolves that were lifted a decade ago.

The Humane Society of the United States, ...Read More

For weeks, the U.S. has been bugging out over Brood X, the massive hatch of cicadas swarming on the East Coast after 17 years underground.

In the past year, law enforcement officers too often have been considered contributors to society's ills, rather than part of the solution, which they are.

In Grand Rapids Friday, in northern Minnesota, the opposite of ...Read More