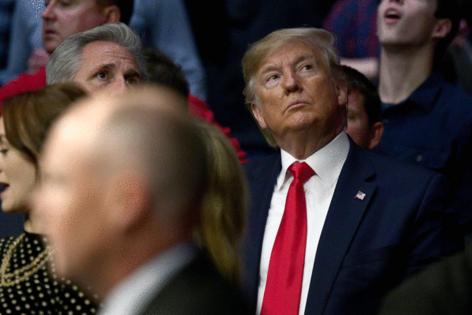 McGregor, like Trump and Gibson, has been known to use jarring racial rhetoric. The Irish Times, McGregor’s hometown paper, called him “the Donald Trump of sport” following a 2017 press conference in which he told his Black opponent Floyd Mayweather “Dance for me, boy.”

McGregor argued that his comment wasn’t meant to have racial undertones.

The 32-year-old Dublin native has expressed great support for the 45th president, referring to him as “phenomenal” and “quite possibly” the best the USA has seen. Trump tweeted his congratulations to McGregor following his January 2020 win over Donald Cerrone.

White told Canadian sports station TSN that pop star Justin Bieber would also be in the crowd, along with comedian Dave Chappelle, Brooklyn Net Kevin Durant and at least one Kardashian.

While holding office, Trump was both cheered and jeered when attending sporting events including a mixed martial arts competition at Madison Square Garden in 2019. It’s anyone’s guess how the ex-president, who continues challenging the results of the 2020 election that made him a civilian again, will be received in Las Vegas where McGregor and Portier — who have each beaten the other once — look to settle the score.

White is a longtime pal of Trump’s. He called the 75-year-old ex-president “a loyal and amazing guy” in 2020 and said he didn’t care if supporting Trump hurts his business. Trump likewise praised White, calling him “a tough cookie.”

Travis Fulton, a mixed martial arts veteran nicknamed “The Ironman,” died by an alleged suicide at an Iowa jail over the weekend after recently agreeing to plead guilty to child pornography charges in federal court.