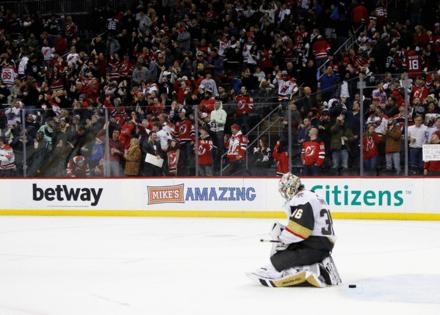 The Devils overcame a 2-1 deficit to start the third period to win. Hamilton tied the game with 1:10 remaining in the third and Knights goaltender Vitek Vanecek out of his net.

Defenseman Ben Hutton and center William Karlsson scored for the Knights, who dropped to 1-4-1 in their past six games. They’ve scored two goals or fewer in four of their past five games.

PITTSBURGH — Kris Letang’s reintroduction to the lineup was just the spark the Penguins needed as they operated without a key defensive cog on a night where defense was at a deficit.

The defenseman had the game-...Read More

The Coyotes won for only the second time in their last 13 games. The ...Read More

PHILADELPHIA — The Flyers needed goalie Felix Sandström to give them one more save against the Winnipeg Jets, rising to the challenge coach John Tortorella issued pregame. Instead, he allowed another goal.

After the ...Read More