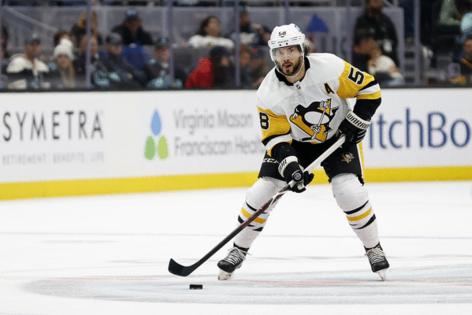 PITTSBURGH — Less than two weeks removed from suffering the second stroke of his career, defenseman Kris Letang is back in action.

During Thursday's practice at the UPMC Lemieux Sports Complex, Letang sported a yellow sweater, signifying that he was a full-contact participant. He had the stroke Nov. 28. As for playing in games, Letang's status is "day-to-day".

"I think everybody is excited when he gets to join the team," Penguins coach Mike Sullivan said after practice. "It's just an indication of the progress that he's made. He's obviously a huge part of this team.

"To see him on the ice, I think for all of us, it's just a little bit of a sense of relief."

Letang was cleared to practice by the team's medical staff led by Dr. Dharmesh Vyas, who has served as the team's head physician since 2013. Vyas was around for the first stroke of Letang's career in 2014, which caused him to miss two months worth of games and practices.

Letang's diagnostic assessment was much quicker than in 2014, considering the team already had been through one stroke with the longtime Penguins blue-liner.

"His stroke this time was much smaller than it was last time," Vyas said. "His symptoms have resolved a lot quicker than they did the last time, as well. We know what to expect. The data has also evolved in terms of how this hole (in his heart) is to be treated."

Letang, who said he typically gets one to two migraines every couple of months, started to get them every three hours on Nov. 28. He made notice of the cycle, informed Dr. Vyas, was booked for an MRI and then went to the hospital.

Three days later, Letang first skated on an individual basis on Dec. 1. Prior to the team's morning skate at PPG Paints Arena before Tuesday's game against the Columbus Blue Jackets, Letang did a full on-ice workout.

On Thursday, he rejoined his teammates in a formal practice setting, rotating in with fellow defensemen Pierre-Olivier Joseph and Chad Ruhwedel.

"He's always surprised us with how well he heals," Vyas said. "We don't think this is accelerated in any way. We're taking all the right precautions to make sure he is safe to go out and play. And when that time comes, we'll let him go back to playing his sport."

Vyas does not think that playing hockey itself is "risky" for Letang, who was born with a very small hole in the wall of his heart. Even with his quick return to practice, Letang is going to rely on Vyas to ensure that he doesn't hurry back to game competition too hastily.

"We've been through this, me and Dharmesh," Letang said. "We have a clear understanding that we're going to take all the time we need and make all the research possible to make sure that it's safe for me to play and there's no danger."

In addition to his own health, Letang has his family of four to worry about as well in his wife, Catherine Laflamme, and his children, Alexander and Victoria. Letang said dealing with his second stroke has been "scary" for his family.

"My kids, they don't care if I'm a hockey player or not. They care about having a dad," Letang said. "Same thing with my wife, she can't care less about hockey and everything. She knows that there's so much more after hockey, there's a long time. You want to be able to enjoy those moments with your family, with your kids."

As it pertains to his mental health, though, Letang said it felt good to get back to practicing with the team. The 35-year-old defenseman is in his 17th season with Pittsburgh, and despite his latest medical scare, it doesn't seem like he'll be cutting short the six-year contract extension he signed with the Penguins in July anytime soon.

"It's a scary word; stroke is a scary word," Letang said. "I've been lucky that these things resolve on their own and I can go back to a normal life. People know me well by now and know that hockey is a passion for me. It's something that it's going to take a lot to drag me out of."