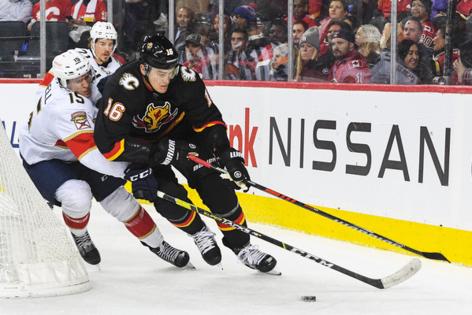 There was a time not so long ago when a three-goal deficit in the first period was not a death sentence for the Florida Panthers, but, on Tuesday, Jonathan Huberdeau was on the opposite bench, Aleksander Barkov was out with an illness and a comeback never materialized.

The Panthers’ skid continued with a 6-2 rout at the hands of the Clagary Flames in Canada.

Florida (10-9-4) gave up a shorthanded goal in the first four minutes, a power-play goal to Huberdeau less than seven minutes later and finally an even-strength goal with 7:57 left in the first, and it was far too much for these Panthers to overcome. Florida dropped its second straight in Alberta to start a five-game road trip and has now lost 6 of 7, sitting two points out of postseason position with more than a quarter of the season gone.

A year after they were both Stanley Cup contenders, neither the Panthers nor Flames (10-9-3) have put together particularly encouraging starts to their follow-up seasons after they made a blockbuster trade in July, and Florida’s situation is particularly dire right now, compounded by another loss at the Scotiabank Saddledome.

Last season, the Panthers had the NHL’s highest scoring offense in 25 years, averaging 4.11 goals per game; this year, they’re averaging just 3.35. Last season, Florida won the Presidents’ Trophy with 122 points; this year, it’s stuck at 24 in 23 games, on pace for just 85.

Three-goal deficits also weren’t much trouble for the Panthers last year: Last season, they led the league with 29 come-from-behind victories and set an NHL record with six three-goal comebacks, including one in the 2022 Stanley Cup playoffs; this year, they have only two comeback wins and none after trailing by multiple goals.

With Florida’s struggles, Huberdeau delivered the crippling blow with 10:39 left in the opening period. In his second meeting with the Panthers since they shipped him and star defenseman MacKenzie Weegar to Calgary to get All-Star right wing Matthew Tkachuk, Huberdeau scored on a power-play scramble in front of the net to put the Flames up 2-0 in Calgary. After forward Nick Cousins cut the Flames’ lead to 3-1 with 10:06 left in the second period, Calgary answered with a goal 4:35 later — assisted by Weegar — to push its lead back to 4-1 and stymie the Panthers’ comeback bid.

Forward Sam Reinhart scored later in the second period, but it was all Florida could muster. The Flames scored twice more in the third period. Tkachuk, in his first game back in Calgary since the trade, failed to record a point after getting an early standing ovation from the crowd, which spent most of the night celebrating and gleefully booing their former star.

Although Tkachuk is on pace for the most points in a single season in Panthers history, the Flames completed their season sweep of Florida.