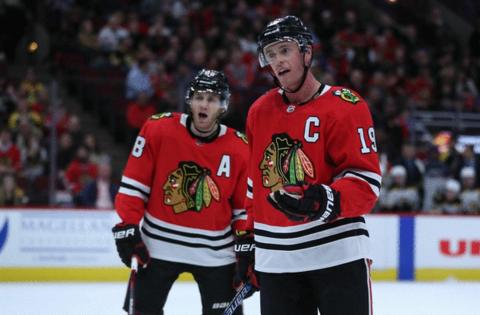 But neither fixture of the Chicago Blackhawks said that the draft-week trades of Alex DeBrincat and Kirby Dach last season — or any other major changes stemming from the team’s rebuild — led them to request a trade over the summer.

“To be honest, there hasn’t been much discussion about anything, even with my agent or my parents or my family,” Kane said on the first day of training camp practice Thursday at Fifth Third Arena.

Toews, who also talked with his agent — Kane and Toews are both Pat Brisson clients — and family, added: “I don’t think anything’s gotten to that point or even close to it over the summer.”

“A lot of people are wondering and love to speculate and see what’s going to happen,” Toews, 34/ said. “I’m coming in here just fully excited to play hockey and not have any expectation, not be too concerned with what happens for me down the road this season or even beyond that.”

Events since November likely fueled speculation that Kane or Toews would welcome a trade.

•The Hawks got off to a franchise-worst start and fired coach Jeremy Colliton, paving the way for a rebuild.

— The Hawks traded Brandon Hagel, the first domino to fall in the rebuild.

PHILADELPHIA — As NHL training camps get underway this week, the greater hockey community is still searching for answers in the midst of multiple ongoing investigations into Hockey Canada’s handling of a sexual assault...Read More

DETROIT — A new coaching staff, many new faces in the lineup, and expected progress from the holdovers who are a year older and more experienced.

That's the Red Wings as they prepare Thursday for the first practice of ...Read More

It takes a lot to get Aleksander Barkov to curse and Matthew Tkachuk, on the eve of his first training camp with the Florida Panthers, nearly got his captain there Wednesday — sort of.

After wrapping up some precamp ...Read More

TAMPA, Fla. — Roster turnover is inevitable every hockey offseason, especially for a team annually pressed up against the salary cap like the Lightning.

But when you lose a rock in the locker room like Ryan McDonagh, ...Read More