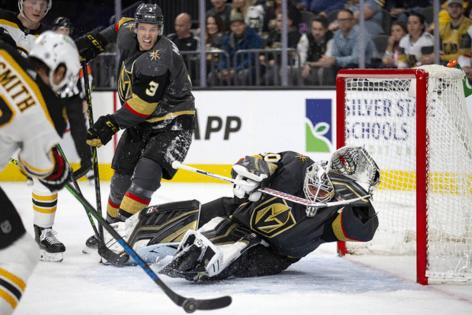 Robin Lehner is expected to miss the season because of a hip injury that will require surgery, the team announced Thursday. An exact recovery timeline has not been determined.

Lehner was the Knights’ primary starter last season and went 23-17-2 with a .907 save percentage and 2.83 goals-against average.

Injuries have plagued Lehner since late last season. He had shoulder surgery May 4. He also suffered a lower-body injury March 8 that kept him out of the lineup until April 3.

The 31-year-old has three years left on his contract with a $5 million annual cap hit.

Brossoit was 10-9-3 with an .895 save percentage and 2.90 goals-against average. The 29-year-old had hip surgery this summer, and general manager Kelly McCrimmon said July 14 that Brossoit was “nip and tuck” to make the opening-night roster.

Thompson was 10-5-3 with a .914 save percentage and 2.68 goals-against average. The 25-year-old gained confidence from his first extended NHL action and said while playing for Team Canada at the World Championship that he thinks he can be a starting goaltender.

“I think I proved to myself, my teammates, the management that I can play at that level and be a No. 1 guy that we can rely on every night,” Thompson said.