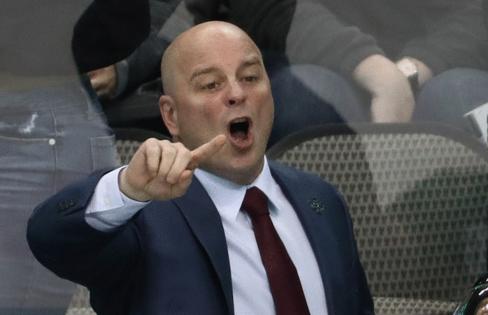 One new name to the list, first reported by the Worcester Telegram & Gazette, is Mike Vellucci, an assistant with the Pittsburgh Penguins under Mike Sullivan the last two years. He was an AHL head coach the previous three years, the first two with the Charlotte Checkers, the Carolina Hurricanes AHL affiliate with whom he won the Calder Cup in 2019, and then Wilkes-Barre/Scranton. Before that, he was head coach of the Plymouth Whalers of the Ontario Hockey League for 13 seasons, where he coached former Bruins star Tyler Seguin.

It was also learned by the Herald that long-time Minnesota-Duluth head coach Scott Sandelin, who has led the Bulldogs to three national championships, interviewed earlier this week, but it’s believed he’s no longer a candidate.

It wouldn’t be a shock if there were more names that haven’t surfaced publicly. This will be the second time Sweeney has hired a head coach, but the first time he’s the opportunity/need to cast a wide net. When Claude Julien was let go in February of 2017, Bruce Cassidy had already been brought up from Providence to be an assistant in Boston and was the obvious choice to replace Julien on an interim basis. When Cassidy went 18-8 and got the previously floundering B’s into the playoffs, there was not much reason to look elsewhere.

Right now, Sweeney’s got a chance to, at the very least, gather information while picking the brains of coaches who are part of successful organizations and at various levels. That could well be the case of the Sandelin interview.

But at some point, Sweeney’s got to pull the trigger on a coach, because there are other pressing issues. Captain Patrice Bergeron, according to multiple sources, wants to return for another season and a deal would need to be worked out with him.

He must also get a firm answer from David Pastrnak, scheduled to be a UFA in the summer of 2023, on whether he wants to remain a Bruin long term. If he gets a negative answer, then that would trigger a franchise-altering trade.

And then there’s next week’s draft in Montreal and free agency on July 13. As of now, Sweeney’s got less than $2.4 million under the cap to make improvements on a team that suffered a first-round exit in May.

Beyond hiring a coach, there’s a lot of work to be done.